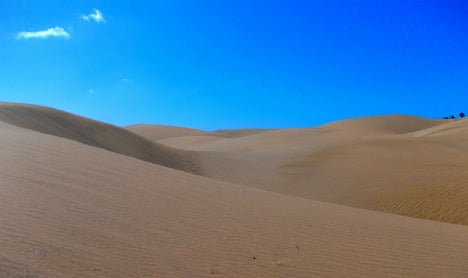 Global warming is likely to change the environment of the Mediterranean region in ways unseen in the past 10,000 years, reshaping forests and turning parts of Europe into desert, researchers warned on Thursday.

The Mediterranean is known as a hotspot for biodiversity, and it is warming up fast.

Already its regional temperatures are 1.3 degrees Celsius higher than the period 1880-1920, said the study in the journal Science.

The rest of the world is about 0.85 C warmer than pre-industrial times, the period scientists use for comparison because it was before widespread fossil-fuel burning led to an outpouring of greenhouses gasses that trap heat around Earth.

World leaders agreed in Paris last year to hold the increase in the global average temperature to less than 2 C above pre-industrial levels and to work to limit the temperature increase to 1.5 C.

To study what the future might look like in the Mediterranean region, scientists analyzed pollen cores from sediments, which tell the story of climate and ecosystem changes over the past 10,000 years.

They projected vast landscape changes under a “business as usual” scenario by century's end, with fossil-fuel use and its associated warming continuing unabated.

“All of southern Spain turns into desert,” said the study led by Wolfgang Cramer and Joel Guiot of Aix-Marseille University in France.

These shifts would “vastly exceed” what Earth has experienced in the last 10,000 years.

“Only under the scenario where the global warming is limited to 1.5 C above pre-industrial temperatures do ecosystem shifts remain inside the limits experienced during the last 10,000 years,” the authors said.

But even then, the situation could be far worse than projected, because the current analysis did not account for other human impacts on ecosystems, like urbanization, soil degradation and changes in land use.