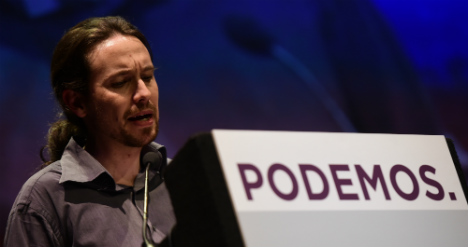 Pablo Iglesias is ready to step up in opposition. Photo: AFP

Born on the streets in 2014 out of vociferous anti-austerity protests, the party led by the charismatic Pablo Iglesias has never made any secret of wanting to dislodge the 137-year-old Socialists (PSOE) as Spain's number one left-wing grouping.

On Sunday, Podemos was handed a golden opportunity when the PSOE reluctantly decided to abstain in a parliamentary confidence vote due at the weekend, which will give acting Prime Minister Mariano Rajoy enough traction to win and push his minority government through.

Since then, Iglesias and his team have zoned in on the Socialists, blaming them for putting Rajoy and his conservative Popular Party (PP) back in power despite the corruption scandals and sweeping spending cuts that marked his first term.

“We are not going to fall into line… we want a different way of doing things and want to change things,” the pony-tailed, 38-year-old told parliament Thursday, as Rajoy submitted himself to a first confidence vote.

“It may be hard for you to recognise this, but you are closer to the PP than to ourselves,” he told the Socialists.

On the back foot, the PSOE has countered it is only abstaining to help unblock the political situation in Spain, which has remained without a fully-functioning government for 10 months after two inconclusive elections.

Back to its roots

Podemos is set to make life difficult for Rajoy's minority government with the 71 lawmakers it shares with smaller, former communist party Izquierda Unida as part of a coalition.

But more than just parliamentary opposition, it has also pledged to return to its roots and mobilise society at a grassroots level.

It backed student protests this week and Iglesias has pledged his support for a demonstration planned near parliament on Saturday, when Rajoy submits himself to the second and decisive confidence vote.

He has also asked his followers to prepare for a potential general strike against the new conservative government.

It took millions of votes away from the Socialists in December 2015 elections and again in repeat June polls, although the grouping has remained firmly in third place after the Socialists.

“Now we are in the phase of strengthening ourselves… by digging trenches in civil society,” Iglesias told online daily eldiario.es, explaining that Podemos would continue to agitate through protests or by providing alternative information.

“Doing brilliant parliamentary work is not the most important when you're in the opposition,” the former politics professor said.

The in-fighting reached such heights that Socialist party chief Pedro Sanchez, a staunch opponent of Rajoy, was ousted by a rebellion earlier this month.

This, analysts say, offers an opportunity for Podemos.

Research polls show that one in five disillusioned PSOE voters could now migrate to the far-left grouping, according to political analyst Pablo Simon.

Podemos has also threatened to withdraw its support for several Socialist regional presidents, which would force them to seek the support of conservatives to remain in power.

This strategy would allow it to once again “position the PSOE as a PP ally,” said Carlos Barrera, professor of political communication at the University of Navarra.

But David Pac Salas, professor of political sociology at the University of Zaragoza, warned that Podemos needs “to be more moderate in its discourse to attract orphan Socialist voters.”

For the moment – and despite an inner party struggle – this is not happening as the more combative Iglesias gets one over on his right-hand man Inigo Errejon, seen as more pragmatic.

Whatever happens, though, it is going to take time for the Socialists to heal, said Pac Salas.

In the meantime, Podemos will continue “to be a bother… look after number one, try to make gains and present itself to society as the true left-wing force,” said Barrera.