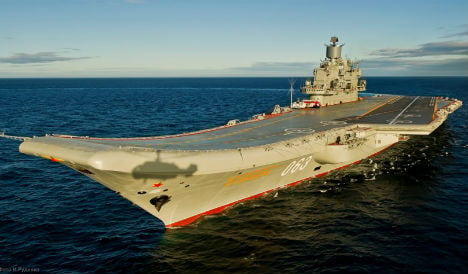 A flotilla led by the aircraft carrier Admiral Kuznetsov was expected to take on fuel and supplies at the Spanish port of Ceuta after passing through the Straits of Gibraltar on Wednesday morning.

But after international outrage, Spain’s foreign ministry is reviewing the permit allowing the Russian warship to take on supplies at its North Aftican enclave.

Two Spanish vessels, the frigate Almirante Juan de Borbón and logistical ship Cantabria, were reported on Tuesday evening to be shadowing the warships as they passed through international waters, and that the Admiral Kuznetsov, along with other Russian vessels and submarines, would dock at Ceuta to restock after 10 days at sea.

“The stops requested by Russia in Ceuta … are being reviewed right now based on the information we are receiving from our allies and the Russian authorities,” said a statement by Spain’s foreign office.

At a meeting of defence ministers in Paris, Spain’s representative, Pedro Morenés, said the government would seek clarification from Russia about “the purpose and destination” of the ships, which he confirmed had “prior authorisation” to stop at Ceuta.

Ceuta serves as a regular stopping off port for the Russians, with at least 60 Russian warships reportedly docking there since 2011, reported El Pais.

Nato secretary-general Jens Stoltenberg warned on Tuesday that Russian warships heading for Syria could be used to target civilians.

“We are concerned and have expressed very clearly by the potential use of that battle group to increase air strikes on civilians in Aleppo,” Stoltenberg said, adding that it was “up to each nation to decide whether these vessels may obtain supplies and refuel at different ports along the route to the eastern Mediterranean”.

“The battle group may be used to increase Russia’s ability to take part in combat operations over Syria and to conduct even more air strikes against Aleppo,” Stoltenberg said.

Guy Verhofstadt, former prime minister of Belgium and now the EU’s representative on Brexit talks with the UK, called into question Spain’s decision to allow the refuelling just a week after it signed the EU statement on Russian war crimes in Aleppo.

“Her Majesty's government has previously expressed concerns to the Spanish government about its hospitality to the Russian navy when we have concerns about Russia's military activity,” a British government spokesman said.

“Access to Spanish ports is a matter for the Spanish authorities,” he added.