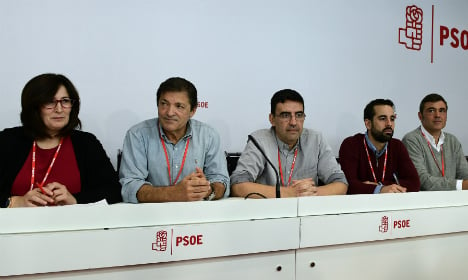 The Socialists have decided to lift their veto on the minority conservative government or not. Photo: Gerard Julien/ AFP

The conservative Popular Party (PP) of acting Prime Minister Mariano Rajoy won elections in December 2015 and again in June this year but without enough seats to rule alone.

The PP therefore needs the main opposition Socialists to either support its government or abstain in a parliamentary confidence vote.

On Sunday, the policy-setting federal committee of the deeply-divided Socialists (PSOE) voted 139 to 96 for abstaining, the grouping announced on its Twitter feed.

The vote capped a high-risk meeting that followed weeks of in-fighting within the PSOE, Spain's second largest party.

The grouping has been weakened by dismal election results and internal strategy disagreements amid Spain's efforts to form a government after the two inconclusive general elections.

The divisions came to a head earlier this month when high-ranking Socialists amenable to a conservative government — so as to avoid a third election — forced party leader Pedro Sanchez to resign.

Sanchez had long opposed Rajoy, who came to power in 2011 and whose four-year term was marked by a series of corruption scandals.

With Sanchez out of the way and the party run by an interim executive, many of the delegates at Sunday's meeting supported an abstention.

“Most Spaniards, more than 65 percent, don't want to go back to the ballotbox and it's the same among Socialist voters,” said lawmaker Ignacio Urquizu.

Now that the Socialists have decided to abstain from another parliamentary confidence vote, Rajoy — who lost one in September — could submit himself to another one next week, with some confidence of victory.

Still, divisions persist within the Socialists.

“We are coming to the federal committee to support the 'No' against Rajoy and the PP,” Idoia Mendia, head of the Basque socialists, whose position is shared by their Catalan colleagues, said as he arrived at the party's headquarters.

Outside around 15 people braved the rain to voice their opposition to Rajoy.

“This is not the PP headquarters,” they chanted.

But For Guillermo Fernandez Vara, president of the western Extremadura region and who helped bring down Sanchez, “the worst results in our recent democratic history (mean) the PSOE finds itself in a key situation.”

Writing in his blog, he argued that only the Socialists could enable agovernment to be formed.

After that, it could mount a “true opposition” once Rajoy was back in power, he wrote.

By the beginning of November, Spain should finally get a government at a sensitive time as the country recovers from a devastating economic crisis.

But with only 137 of the 350 seats in parliament, the PP's government would be weak.

It would face opposition not only from the Socialists but also two upstart parties — the far-left Unidos Podemos and centrist Ciudadanos.

Their participation in the last two elections put an end to Spain's traditional two-party system.

The Socialists, meanwhile, run the risk of alienating grassroots members staunchly opposed to the corruption-tainted PP.

In a weekend interview with online daily El Espanol, Socialist lawmaker Susana Sumelzo said the party would “undoubtedly” do badly in future elections and had lost credibility among voters.

“I predict that in the medium and long-term, it will be very complicated.
We will have to work a huge amount to get our credibility back.”