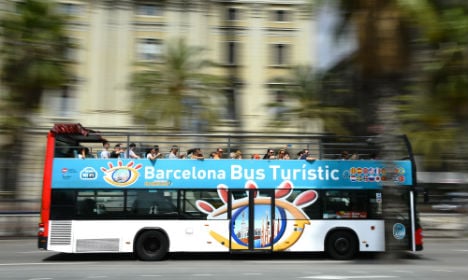 A combination of lower interest rates and petrol prices along with unrest in other Mediterranean countries benefited Spain's coastal regions, with their famed “sun and beaches,” he said.

But he warned that “it will be difficult to reproduce this one-off scenario.”

Exceltur believes that out of the 75 million estimated tourists to Spain this year, close to four million will be holidaymakers who used to go to places like Turkey or Egypt.

But it's “a very uncertain and volatile bubble,” Zoreda said.

In 2016, the tourism sector is expected to grow 4.4 percent year-on-year — compared to a forecast 3.2 percent expansion in Spain's overall economy — which is “the highest rise in the past 15 years,” said Exceltur.

In the first eight months of the year, Spain saw a 10 percent increase in the number of tourists from 2015 — or a total of 52.5 million people, with the Brits in the lead.

This compares with more than 68 million foreign visitors for the whole of 2015, when Spain was ranked the third tourism destination in the world after France and the United States.

But dark clouds are gathering.

For one, business tourism has dropped due to political uncertainty in acountry that has been without a fully-functioning government for 10 months after two inconclusive elections.

More importantly though, tourists on average have not been spending as much as last year — between two and six percent less depending on the months – as they stay for shorter periods of time.

Generally, the trend is to save money, said Philip Moscoso, professor at Madrid's IESE Business School.

“More people arrive with low-cost airlines and opt for alternative types of rentals”, such as Airbnb, he said — a phenomenon that hurts hoteliers.

Over the past two years, the number of regulated tourist accommodation hasrisen 1.6 percent, while rentals through platforms such as Airbnb have jumped 75 percent, said Exceltur.

As such, popular destinations such as Barcelona and the Balearic Islands reached saturation point, which in some cases posed environmental problems.

Margalida Ramis of Majorca's GOB environmental group said the island's infrastructure was not able to handle “the effects of the summer”, pointing for instance to the treatment of waste water.

This summer, dirty water found its way into the island's northern Albufera natural park as purifiers at a nearby resort's plant stopped working correctly.

The influx of tourists on the country's beaches also threatens a fragile ecosystem made up of dunes and aquatic plants, said Ramis, who called for a limitation on unregulated tourism rentals.

Authorities are trying to “shift the 'sun and beach' model towards a type of tourism that would be less about quantity and more about quality,” said Moscoso, as well as highlighting the country's heritage.

Barcelona, for instance, is trying to promote excursions to the nearby rocky range of Montserrat, while for the northern Basque Region and the wine-making Rioja area it's gastronomy.

Another proposal is to attract more Asian tourists — who by and large prefer shopping and visits over sunning themselves on the beach.

But Moscoso pointed out that business had been so good recently for the “sun and beach” sector companies are reluctant to drastically change their models.