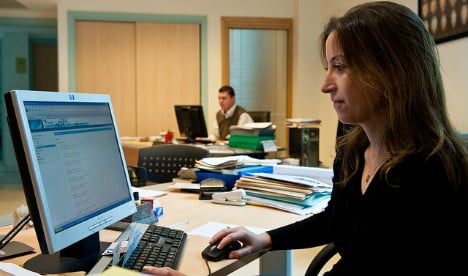 Spain has one of the largest pay gaps among European countries, ranking only above 10 other nations in Expert Market's survey of 40 countries.

It ranks alongside Switzerland, but above the UK, Germany and Austira.

Bosnia is the nation with the widest gap where women earn an average 46 percent less than male workers.

Slovenia, meanwhile, had the smallest gap with women there making on average 96.8 percent of what men earn.

This was followed by Malta, Poland, Norway and Italy.

“It’s the 21st century, so seeing such wage gaps is shocking considering the opportunities for both men and women,” Expert Market researcher Tom Watts told The Local.

Taking the average earnings of women in each country (as a percentage of the income of men), we have the time calculated when women begin to work effectively for free throughout Europe.

Taking the average earnings of women in each country (as a percentage of the income of men), the report has calculated the exact date when women begin to work effectively for free throughout Europe.

It shows that in Spain, women effectively work for ten weeks without pay when compared to the earnings of men –  that's from October 21st until the end of the year.

The date women stop getting paid in Europe

Across Europe, women made on average 17 percent less than men, which means that as of October 31st, European women will essentially be working for free.

Watts said that in European countries like Spain, there may still be “dated mindsets” about women and families that impact the work they choose to do and thus how much they earn.

“In Spain, I understand that there is a high proportion of female employees in part-time jobs, which can affect hours and pay,” he explained.

“People still tend to think that the woman stays at home and looks after the family while the man goes out and works, and that is reflected in the wage gap we see.”

Spain is still suffering the effects of a deep economic crisis and unemployment currently stands at 20 percent, the second highest in the European Union after Greece. The number of women in Spain searching for work rises to 22.3 percent.

“Generally, more men are in work than women in Spain, so this limiting of opportunities can impact the amount women earn,” explains Watts, who adds that the secondary educations for women in Spain fall far below the EU average.

“Without higher education qualifications it can be hard for women to progress into higher-paying, more senior roles,” he said.

Spanish women are also “over-represented” in certain sectors in Spain compared to the EU average, such as retail and food service activities.

“These are traditionally lower paying jobs so have an impact on the overall gender gap”.

In Spain management and supervisory positions are overwhelmingly held by men, according to a report by the European Commission published in 2015.

“Within each sector men are more often promoted than women, and paid better as a consequence. This trend culminates at the very top, where amongst CEOs less than 4 percent are women,” the report said.

Spanish women also take on the majority of the household chores and spend much more time on unpaid tasks such as childcare or caring for elderly relatives, even if they too hold down a job.

Working men spend on average 9 hours per week on unpaid care and household activities, while working women spend 26 hours – that’s almost 4 hours every day, according to the European Commission report.

As a result, women are also much more likely to work part time.

In Spain more than 1 in 3 women reduce their paid hours to part-time, while only 1 in 10 men do the same.

A survey by Metroscopia earlier this year showed that 71 percent of Spaniards admitted that women have a harder time in general than men, as they are forced to juggle work and family life, earn less for doing the same amount of work, and have restricted access to positions of responsibility.

Watts said he hopes that the Expert Market survey will further discussion about the issue of equal pay.

“Things that can be done to reduce the gap include initiatives such as 'Equal Pay Day' to raise awareness, greater transparency with corporate pay structures and encouraging companies to establish gender parity as part of their strategy.”

“It’s good that this is coming to the forefront and that we can hopefully kick start change.”