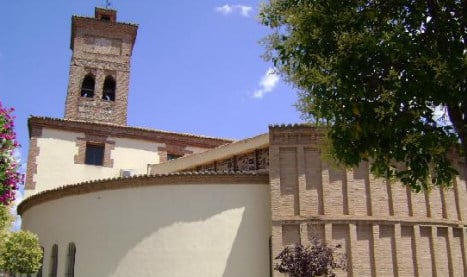 Neighbours have been complaining about the bells of Nuestra Señora de la Asunción. Photo:

The council in Móstoles, a dormitory town 18km southwest of Madrid, sent out technicians to measure the noise level from the peals of the Our Lady of the Assumption Church following complaints from neighbours.

It was found that the bells of the church, which dates from the 12th century, measured nearly 30 decibels above the 55 rate permitted by town regulations.

Eduardo Gutierrez, the town planning spokesman and a councillor for the left-wing IU-LVCM party, said “The town council had to act after receiving complaints about the noise from those living nearby”.

“The reading showed that the noise was far above permitted levels,” he told El Pais newspaper.

The standard fine imposed on establishments that exceed the noise level by more than 10 decibels is €16,000, although church authorities said they have yet to receive notice of the fine.

Parish priest Ignacio Torres said the same bells have always been rung in the town and that they were usually only tolled at noon, before evening Mass and during village fiestas.

“They seem to permit illegal parties held in squats and do nothing about the problems of late night noise in the town but instead consider it a priority to punish the church for the sound of the bells,” said Jesus Pato, PP councillor in Móstoles.

“These bells are a part of our town’s history,” he added.