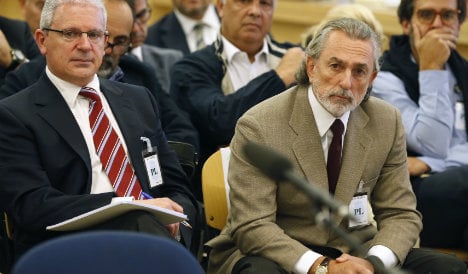 Businessman Francisco Correa is accused of having showered PP lawmakers and councillors with bribes between 1999 and 2005, including former party treasurer Luis Barcenas.

In exchange, his companies, or those of his friends, were allegedly given contracts for public works or for organising events, such as the 2006 visit of Pope Benedict XVI in the eastern city of Valencia.

“I'm used to giving gifts to big companies that do business with me, (so) why wouldn't I give gifts to a man who is giving me a lot of business?,” he asked at the National Court just outside Madrid.

“It's a usual practice.”

“The first time that I heard the words 'bribery' and 'malfeasance' was when they detained me,” he added.

“I was involved in my business, I'm not a lawyer.”

Correa is among 37 defendants on trial, including two former party treasurers, notably Barcenas, who is accused of stashing tens of millions of euros in Switzerland.

The PP itself has been called to the stand for allegedly benefiting from funds obtained illegally by lawmakers.

But unlike the defendants, the party as a whole faces no criminal charges.

Correa said that he was the middle-man in public tenders.

“If we were successful, (the company) handed over a commission. I kept part of it and Barcenas kept the other part,” he said.

The case claimed a high-profile victim early on, forcing the resignation of then health minister Ana Mato in 2014.

Mato's ex-husband Jesus Sepulveda is in the dock for embezzlement of public funds and influence-peddling when he was mayor of Pozuelo de Alarcon, a town near Madrid, from 2003 to 2009.

Sent in the clowns

Correa said he had given Sepulveda several “gifts”, including a car.

“It didn't cost us anything to send a clown to his children's birthday parties. It wasn't a bribe, it was a gift,” he said.

Correa said his relationship with the PP started in the 1990s through Barcenas, who has also been accused of running a slush fund financed by corporate donors.

The fund was allegedly used to hand secret cash payments to high-ranking PP members during the 1990s and 2000s.