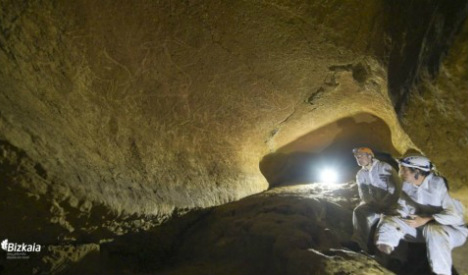 The discovery is described as most exciting and striking on the Iberian peninsula. Photo: Basque Government

About 50 paintings measuring up to 150 centimetres (60 inches) and depicting horses, bisons and lions were found in a cave “extremely difficult to access” and located under a building in the centre of Lekeitio in the Basque country, senior local official Andoni Iturbe told AFP. Cave specialists and archaeologists have examined the paintings found in May and declared them to be the most “spectacular and striking” of their kind ever found in the Iberian peninsula. The cave would not be opened to the public both to preserve the paintings and because it is difficult to access.

Experts will hold a special congress at the end of the month to discuss the findings. The cave of Altamira with prehistoric bison paintings  (above) in Spain's Cantabria region is a Unesco World Heritage Site.