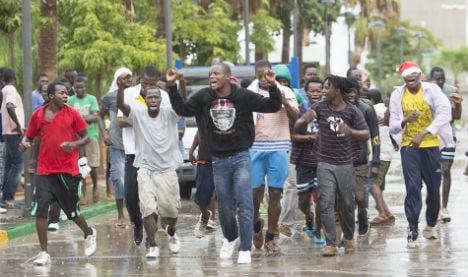 “At eight (0600 GMT) this morning, there was an organised assault and Moroccan forces were overwhelmed,” a spokesman for Spain's Guardia Civil police force told AFP.

The young men from sub-Saharan Africa managed to get through a border system that is composed of two six-metre-high (20-feet-high) fences, with a criss-cross of steel cables in between.

In order to get across, migrants often use hooks and shoes studded with nails.

Melilla and Ceuta, another Spanish enclave nearly 400 kilometres (250 miles) away on the north coast of Africa, have for some years been a flashpoint for migrants trying to enter Spain.

They are the only two land borders between Africa and the European Union.

The migrants who got across on Thursday were taken to a temporary reception centre where they have the right to ask for asylum.

Few manage to get this status, though, as they are often considered economic migrants.

The last such raid on Melilla took place on September 4th, when some 100 migrants also managed to get across.

According to the International Organization for Migration, more than 4,600 migrants and refugees from Asia, Africa and the Middle East arrived in Spain by land or by sea in the first six months of the year.

But associations and academics regularly denounce the way migrants are treated, and particularly the prison-like conditions in Spain's seven immigration detention centres, which are meant for people who are in the process of being deported.

In May, Amnesty International said Spain's asylum system was “inefficient, obsolete and discriminatory”, and blasted the “embarrassing” low number of refugees that have been taken in.