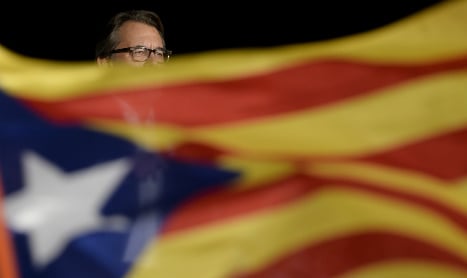 In his court order, the investigating magistrate said Mas would take the stand on charges of “serious disobedience” and “malfeasance” for allowing the non-binding ballot to take place in November 2014 in the wealthy, northeastern region.

He risks a 10-year ban on holding public office.

Mas had initially wanted to organise an independence referendum like the one held in Scotland, but the Spanish government went to court to block his plans.

The Constitutional Court upheld the government's complaint, so Mas decided to go ahead with a symbolic vote instead.

Over 80 percent cast their ballot in favour of independence – although just 2.3 million people out of a total of 6.3 million eligible voters in Catalonia took part.

Apart from Mas, two members of his former government will also be tried as “accomplices,” the court order said, in a case that the former Catalan president and his allies say is politically motivated.

Prosecutors, though, argue that they “created a strategy of complete and effective defiance of the (vote) suspension decided by the Constitutional Court.”

News that Mas will stand trial comes two weeks after Carles Puigdemont, the current president of Catalonia, promised he would call a referendum on whether to secede from Spain in September 2017.

He hopes to hold the vote with the agreement of Madrid, but has said he will press ahead anyway if the central government refuses.

Calls for outright independence have increased over recent years