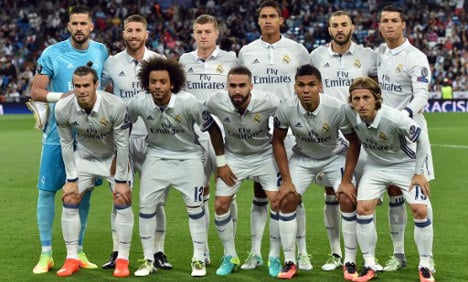 The Real Madrid players prepare for a match at their current stadium. Photo: Gerard Julien/AFP

The project, less ambitious than the previous version blocked by the courts, includes the creation of a 6,000m2 public garden alongside the stadium, will be financed by Abu Dhabi-based sponsor IPIC, who will be given naming rights.

“It will be a spectacular transformation of the Santiago Bernabeu stadium, which is one of the icons of our city and which we want to make one of the best stadiums in the world,” said club president Florentino Perez during a press conference at the Town Hall.

Perez added that investment company IPIC will pay for the refurbishment, due to begin next year, in its entirety in return for the stadium carrying the company's name, although it will still also carry the name Bernabeu. The new stadium will be furnished with a retractable roof without losing any of the 81,000-seat capacity.

The agreement comes around a year after the Spanish courts blocked an original 2014 project plan, which included the enlarging of the stadium plot onto public land in order to build a hotel and shopping centre. The shopping centre will now be included within the existing stadium while the hotel is no more than a “possibility”, according to Perez.

The original stadium was inaugurated in 1947 before being renamed in 1955 after iconic former president Santiago Bernabeu, who died in 1978.

It has already undergone several makeovers since the 1982 World Cup in Spain. Real's great domestic rivals Barcelona have also announced plans to remodel their Camp Nou ground. That too will cost 400 million euros and will include a retractable roof while also increasing the capacity from 99,000 to 105,000.

Real's cross-city rivals Atletico Madrid will for their part move to a new 73,000-seat stadium in the summer of 2017, leaving behind the 55,000-capacity Vicente Calderon stadium, which is set to be demolished and turned into a park.