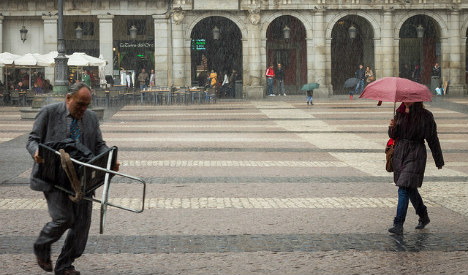 The change in weather will mean almost everyone will experience a cold and wet bank holiday of October 12th when Spain celebrates Hispanic Day, which is also Armed Forces Day.

Umbrellas will be compulsory at the huge military parade staged in the centre of Madrid and attended by the Royal family and leading politicians.

Only the Canary Islands and pockets of southern Spain are predicted to escape the autumnal weather.


Aemet forecasts rain across the peninsula on Wednesday.

Ana Casals from the National Meteorological Agency (Aemet) warned: “Everywhere in Spain will experience rain at some point this week”.

The cold front will arrive from the Atlantic to hit the northwest of the country on Tuesday bringning storms gradually moving south and east over the course of the week.

Temperatures are predicted to drop between six and 11 degrees by Wednesday.