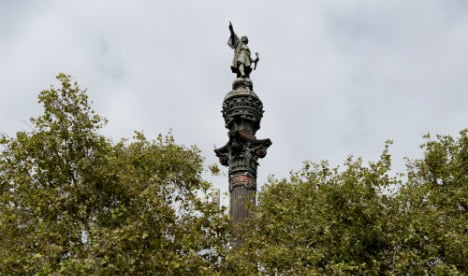 Each October 12th, Spain celebrates Hispanic Day with a national holiday to commemorate the day Christopher Columbus reached the Americas in 1492.

It is also Armed Forces Day, when Spaniards pay homage to their fellow countrymen and women who have given their lives for Spain with a huge military parade through the centre of Madrid. Military aircraft trail smoke in the colours of Spain's national flag during the parade. Photo: AFP

But separatists in the region of Catalonia have long felt uncomfortable marking a day that not only has connotations of imperialism and oppression but was also used by General Francisco Franco to “extoll the values of his dictatorship”.

The mayor of Badalona, Dolors Sabater, of the Guanyu Badalona en Comú party – which supports Catalonia breaking away from Spain – has therefore cancelled the bank holiday and told council employees that they can turn up for work if they want to, and take an alternative day off on December 9th.

“October 12th celebrates the genocide of the occupation of America and has Francoist connotations,” said a statement issued by the council in Badalona, Catalonia's third largest city.

“There are people who chose to celebrate their Hispanic heritage on a day that doesn’t have the connotations of October 12,” Sabater told Onda Cero radio on Monday.

“It has therefore been agreed they can take an extra day off on December 9th, to make a long weekend of the Constitution Day holiday”.

It’s not the first time the continued celebration of October 12th has been brought into question.

Last year, Barcelona’s mayor, Ada Colau, said the country should not be marking “a genocide” with an €800,000 (£700,000) military parade, although a motion to cancel this year’s October 12th bank holiday was rejected by the council last month.

The city hall in the Catalan capital also held a vote on whether it should remove a statue of Christopher Columbus from the foot of the Rambla, and instead erect a more fitting memorial  reflecting “American resistance to imperialism, oppression and indigenous and African-American segregation”. But that motion too was rejected.

Last year, José María González, the Podemos-backed mayor of the southern city of Cádiz, tweeted: “We never discovered America; we massacred and suppressed a continent and its cultures in the name of God.”