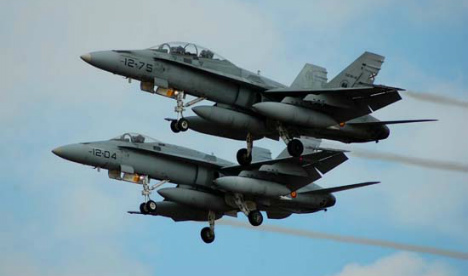 Spain was the fourth NATO nation to scramble jets as the TU-160 planes skirted the airspace of Norway, the UK and France before reaching Spain and turning north again.

The “sortie” took place on September 22nd but only became public this week in a report issued by France’s Ministry of Defence which described the incident as an “air policing mission”.

According to a statement, Norway first detected the two Blackjack bombers to the north and scrambled two F-16 fighters to intercept the Russian jets as the headed towards the north of Scotland.

Britain's Royal Air Force then sent Typhoon aircraft from RAF Lossiemouth as the Russian planes skirted UK airspace to the west of Shetland.

Two French Rafale fighter jets then joined the Russian bombers as they skirted the west of Ireland, boosted by another two Rafale jets as they flew south.

Spain then sent two of its F-18 fighters to intercept the Russians off Bilbao at which point the bombers turned around and headed back north.

Spanish media reported that it was the first time Russian aircraft had been intercepted so far south.

The incident comes at a time of  heightened tension between the West and Russia, after the U.S. broke off military cooperation with Moscow over Syria.