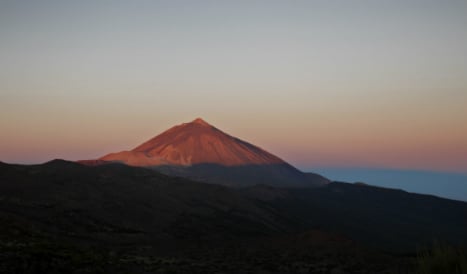 Tenerife's volcano is "not about to erupt". Photo: AFP

In recent days a series of mini-quakes have been detected by seismologists on the island hitting south west of Mount Teide, the volcano that dominates the skyline of the Canary Islands. Around 100 mini-quakes were recorded within 12 hours on Sunday. Photo: Involcan

Although equipment recorded at least 100 quakes during Sunday none of them were strong enough to be felt by people on the surface so islanders were perplexed at headlines in British tabloids warning of “panic” that the volcano was about to blow.

But while the seismic activity was largely ignored in the Spanish press, The Daily Express, The Sun and The Mirror all ran sensationalist stories warning holidaymakers of an imminent eruption.

VOLCANO WARNING: Panic on Tenerife amid fears huge Mount Teide is about to BLOW: https://t.co/TFhQS8gJ3h pic.twitter.com/9m5YmQfIkr

Tenerife tourism board immediately dismissed the reports as “scare stories” and having no basis in truth.

“It’s just clickbait at its worst from British tabloids I’m afraid,” a senior source at Tenerife’s Tourism Corporation, a department of the island’s government told The Local.

“The first most people on the island even knew of the seismic activity was when the article in the Daily Express appeared. No-one here even felt the earth move. And saying an eruption was imminent alongside a photograph of lava flowing is just irresponsible and a downright lie,” she added. The graph shows a spike in activity on October 2nd. Photo: Involcan

Involcan explained that no sign of deformation at Teide volcano had been detected and therefore no movement of magma under the volcano, meaning that the quakes are not an early warning of an eruption caused by an upwelling of magma.

Instead, they are probably due to a collapsing channel in the volcano's hydrothermal system (the network of cracks that lets hot gas escape from Teide).

An official statement from the government tourist department sought to reassure residents and holidaymakers that seismic activity on the island was carefully monitored and there was currently no risk at all.

“Due to its volcanic origin, Tenerife is continuously monitored and any seismic activity associated with magma would be detected in very early stages. It is worth pointing out that the last volcanic eruption that took place on the island happened over 100 years ago, causing no personal injuries of any kind,” said the statement.

“Therefore, everything is as calm as usual in Tenerife; there have been no changes related to these micro earthquakes and there are no current risks. Everyday life remains the same in the island’s cities, towns and tourist areas – the situation is totally safe.”

With a summit of 3,718-metres Mount Teide is Spain’s highest peak and last erupted in 1909.

Tourism chiefs warned that untrue reports that the volcanco was about to blow could have a damaging effect on visitor numbers to the island.

“The Tenerife Tourism Corporation advises obtaining information exclusively from official sources rather than from sensationalist articles to avoid unnecessary fear and confusion.”