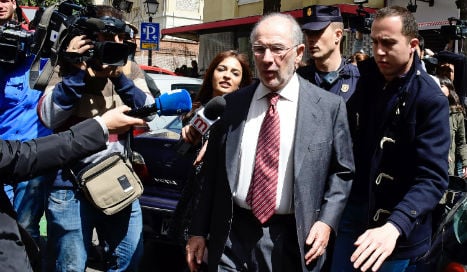 The former economy minister is accused of overseeing a system while at Spain's Caja Madrid and then at Bankia that helped him and 64 others also on trial to use funds on items such as parties and luxury shopping without justifying or declaring the spending.

Altogether, they allegedly spent €12 million ($13.4 million) between 2003 and 2012 — sometimes splashing out at the height of Spain's devastating economic crisis.

“It was completely legal,” Rato – a fallen star of the ruling conservative Popular Party – calmly told the courtroom just outside Madrid, on the stand for the first time since the trial kicked off last week.

According to the indictment, Rato maintained a “corrupt system” established by his predecessor Miguel Blesa when he took the reins of Caja Madrid in 2010, and then replicated it at Bankia, whose subsequent near-collapse sparked an EU bailout of Spain's financial sector.

“They were part of my contract as a member of the board of directors,” the 67-year-old said, adding it was a salary add-on.

“I had a right to all the annual or long-term incentives that the management team received.”

Meanwhile at Bankia, a group born in 2011 out of the merger of Caja Madrid with six other savings banks, the credit cards were merely advances on salaries, he added.

Rato himself spent close to €100,000 in two years with his credit cards.

Other executives or board members spent a lot more.

But as one of the men who oversaw the system, prosecutors are seeking a jail sentence of four-and-a-half years for him, a fine of €108,000 and €2.6 million in damages.