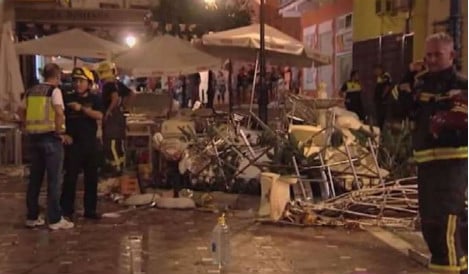 A total of 77 were hurt in the blast. Photo: Lilmeek01 / Twitter
Saturday evening's blast sparked panic, coming as hordes of people celebrated a local festival, the Feria de San Miguel, in their small town of some 30,000 people just east of Malaga.
Most of the injured suffered cuts from flying debris or bruising from falls as they fled in confusion.
Rescue services, which received dozens of calls from people fearing a terrorist attack, said five people were in a serious condition after the blast in the bistro's kitchen.
Local daily Sur said an employee at the eatery had raised the alarm just moments before the blast but there was insufficient time to evacuate the venue, which local media showed as strewn with glass and other debris.
Url copied to clipboard!