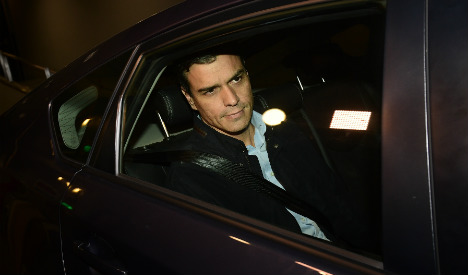 The roughly 300 members of the party's federal committee – its de-facto parliament – are being summoned to party's Madrid HQ for a showdown between allies of Sanchez and opponents who want to oust him.

The Socialist Party (PSOE) has been wracked for months by internal dissent over Sanchez's leadership, with his opponents unhappy with the way he has navigated Spain's political gridlock following two inconclusive general elections.

Internal tensions boiled over into open warfare after 17 members of the party's executive quit on Wednesday in a bid to oust Sanchez.

His detractors want the PSOE to use its 85 parliamentary seats to help unblock the national deadlock and allow a rightwing government through by abstaining in a vote of confidence.

They want Sanchez to step down and allow an interim leadership to be appointed which would likely allow this to happen.

The PSOE's place is “in the opposition,” said Socialist lawmaker Eduardo Madina who opposes Sanchez.

But Sanchez, whose party took a drubbing in two regional elections on Sunday and came second in national elections in December and June, is holding on.

He is pressing ahead with his plans to appeal directly to grassroots members by calling primary elections on October 23rd to elect a new leadership.

Sanchez has been steadfast in his refusal to back any government led by acting Prime Minister Mariano Rajoy, whose conservative Popular Party (PP) won the most seats in the last general election in June but lacks an absolute majority in parliament.

The PP needs the backing of the Socialists to form a new government.

Sanchez has argued he could not back a party that imposed steep spending cuts and is implicated in several corruption scandals, including accusations of illegal financing.

Spain's parliament has until October 31st to produce a government or new elections to be called in December — the third in a year.