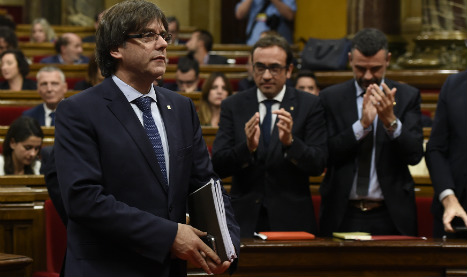 Catalan regional lawmakers on Thursday approved regional President Carles Puigdemont's plans to call a referendum next year on independence from Spain, which has been without a fully functioning government since December.

Puigdemont called the vote of confidence in his government and its plans after his pro-independence coalition that rules Catalonia broke down in June when its most radical component — the far-left CUP party — refused to back the government budget for 2016.

The CUP had since said it would help bring the coalition back together again and vote for Puigdemont, but only in exchange for a Scotland-style referendum next year.

In an address to the Catalan regional parliament on Wednesday on the eve of the vote, Puigdemont said he would hold an independence referendum in September 2017 whether or not the central government in Madrid agrees to one.

He won the confidence vote with 72 votes in favour and 63 against. He was backed by the CUP's 10 lawmakers and the 62 MPs from his “Together for Yes” coalition.

Catalan separatists have for years tried – in vain – to win approval from Spain's central government to hold an independence referendum like Britain's Scottish referendum in 2014 which resulted in a “no” vote.

Puigdemont's predecessor Artur Mas had already tried to hold such a vote. But when it was banned by Spain's Constitutional Court, he held a symbolic independence vote in November 2014.

Over 80 percent cast their ballot in favour of independence then – although just 2.3 million people out of a total of 6.3 million eligible voters took part.

Unlike British former counterpart David Cameron with Scotland, which did get a vote in 2014, acting Prime Minister Mariano Rajoy has always categorically refused a referendum.

Secessionist parties in the wealthy, northeastern region approved a plan to achieve independence by next year after winning a clear majority in 2015 regional elections, but ideological differences have hindered progress.

Opposition lawmakers on Thursday mocked the lack of progress and argued that the referendum would be illegal and would not be recognised.

“You are on a stationary bicycle, you peddle but you are going nowhere,” said Ines Arrimadas, the leader of the anti-independence Ciudadanos party which sided against Puigdemont in the confidence vote.

“You can prolong the agony as long as you want but you will never have the political, legal or social authority to break Catalans away from the rest of Europe.”

“Neither you nor anybody will call an illegal referendum,” he told the assembly.

But as Spain remains mired in nine months of political stalemate after two inconclusive elections, it is not certain that the PP-led acting government will still be in power next year.

Rajoy's traditional Socialist rivals however also refuse to back any referendum, so would not be any more flexible if they came to power.

The only party on the national scene that has said it would allow one is far-left, anti-austerity Podemos, but it does not have enough parliamentary seats to govern alone.

Polls show Catalonia, which accounts for almost a fifth of Spanish economic output, is roughly divided over splitting from Spain.