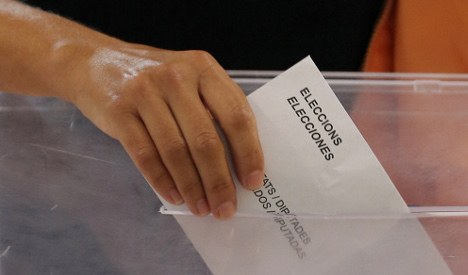 He mistakenly handed in an envelope containing a christening gift. Photo: AFP

The man from the town of Redondela in Pontevedra province of Galicia went to his local polling booth on Sunday morning to cast his vote in the regional elections.

He then travelled on to Ourense, about 100km away to attend a christening and presented the parents of the baby with a gift – an envelope meant to contain a €200 in cash.

But in fact, inside the blank envelope was a ballot paper.

At that moment the gift-bearer realized his error and knew that he had mistakenly pulled the wrong envelope from his pocket and posted the christening present into the ballot instead of his voting paper.

He immediately rushed back to Redondela,  stopping at the police to make a police report before arriving at the polling station set up in his local Alexandre Bóveda primary school just as the vote closed.

Once the ballot boxes were emptied his cash filled envelope was located and he was able to replace it with the original ballot paper.

The PP renewed its absolute majority in the rainy northwestern region of Galicia, a long-time party stronghold and the home of acting PM Mariano Rajoy.