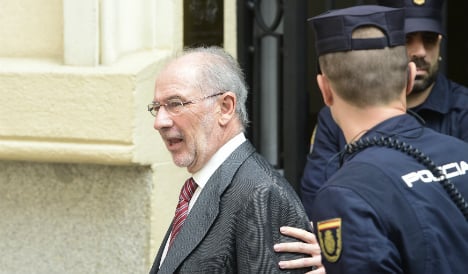 Uncovered in 2013 by a journalist who saw a hacked email alluding to “black credit cards,” the case threatens to land the former economy minister and onetime star of the ruling conservative Popular Party (PP) in jail and with a hefty fine.

It is also another thorn in the PP's side after repeated failed attempts to form a government following two inconclusive elections, due to a lack of support that is in large part due to corruption scandals sullying the party.

Rato will stand trial with 64 other former executives and board members at Caja Madrid and Bankia, whose near-collapse sparked an EU bailout of Spain's financial sector.

They are accused of having paid for personal expenses with credit cards put at their disposal by both banks, without ever justifying them or declaring them to tax authorities.

Altogether, they allegedly spent €12 million ($13.5 million) between 2003 and 2012 – sometimes splashing out at the height of Spain's devastating economic crisis.

According to the indictment, Rato maintained the “corrupt system” established by his predecessor Miguel Blesa when he took the reins of Caja Madrid in 2010.

He replicated the system when he took charge of Bankia, a group born in 2011 out of the merger of Caja Madrid with six other savings banks.

Now 67, Rato was economy minister and deputy prime minister in the PP government of Jose Maria Aznar from 1996 to 2004, and he then went on to head up the International Monetary Fund until 2007.

His subsequent career as a banker in Spain was short-lived – from 2010 to 2012 – but apart from the case of the undeclared credit cards, it also led to another banking scandal considered the country's biggest ever.

Thousands of small-scale investors lost their money after they were persuaded to convert their savings to shares ahead of the flotation of Bankia in 2011, with Rato at the reins.

The state injected billions of euros but faced with the scale of Bankia's losses and trouble in other banks, it asked the EU for a bailout for the entire banking sector and eventually received €41 billion.

Rato and others were put under investigation, accused of misleading small investors in the listing of Bankia, which has since paid out €1.2 billion in compensation.

As such, the trial on Monday is a separate, smaller part of a much wider scandal involving Bankia.

But revelations that executives like Rato were spending millions of euros of the bank's money sparked an outcry in a country plunged into crisis since 2008 and forced into drastic austerity.

With his undeclared credit card, Rato is accused of having spent €99,000 in two years on items such as luxury bags, five-star hotels and alcohol.

Prosecutors are seeking a prison sentence of four-and-a-half years and a 2.6-million-euro fine.

Rato, however, has denied any wrongdoing and said the credit cards were for discretionary spending as part of the pay deal for executives.

While many PP members are involved in the case, several union officials and people from left-wing parties are also among the 64 other accused.

Rato, meanwhile, is the second former IMF chief to be dragged to court.

And Christine Lagarde, who took over from Strauss-Kahn and is the current IMF chief, will be in the dock in December over a massive state payout to French tycoon Bernard Tapie when she was finance minister.