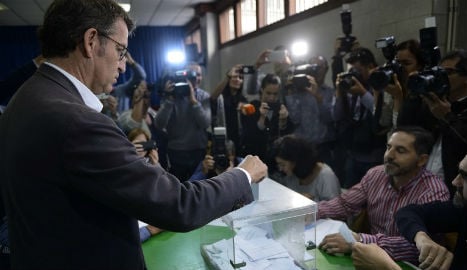 Partido Popular candidate Alberto Nunez Feijoo voted in the election on Sunday. Photo: Miguel Riopa/AFP
The country is stuck in limbo, run by a government without full powers following two inconclusive elections which the conservative Popular Party (PP) won without an absolute majority, and which have seen parties unable to reach any coalition deal.
As such, mainstream parties are watching the regional elections closely to see if they lose ground to upstarts or nationalist groupings, and none more so than the Socialist party (PSOE), which surveys predicted would fare badly.
A poor showing — following bad results in December’s general election and again in a June repeat vote — may prompt the party’s dissenting “barons”, or regional presidents, to push party leader Pedro Sanchez out.
“If we don’t have a good score, they will use that to try to overthrow Pedro Sanchez,” a source close to the Socialist leader, who wished to remain anonymous, told AFP.
Parliament has until October 31 to produce a government or face an unprecedented third general election.
Antonio Barroso, an analyst with political consultancy Teneo Intelligence, said the reaction in the PSOE in the event of poor results “will provide a signpost of whether there could be an internal revolt, possibly to get rid of Sanchez and change the party’s position ahead of the October 31 deadline.”
Sanchez is unpopular among many “barons” who think the party should help put an end to Spain’s nine-month deadlock by admitting defeat, allowing a right-wing coalition government led by acting Prime Minister Mariano Rajoy to come to power. .
Sanchez, however, refuses to do so. The PSOE voted against a Rajoy-led government in a parliamentary vote of confidence earlier this month, and is attempting to negotiate a left-wing coalition alternative with arch-rival Podemos, the far-left anti-austerity party.
But a weak result could put an end to this, either forcing Sanchez out or pressuring him into allowing the right-wing coalition government through by abstaining in another vote of confidence.
– ‘Domino effect’ –
Polls ahead of this weekend’s vote indicated that in the northwestern region of Galicia, the Socialists would lose their second place to the En Marea coalition that includes Podemos, while the ruling PP is expected to win again.
In the northern Basque country, the PSOE was forecast to lose ground to Podemos and possibly score its worst ever result in the lush green region on the Atlantic coast.
The moderate nationalist PNV party is expected to win again in the region, though without an absolute majority, followed by the more radical, separatist EH Bildu grouping.
Barcelona-based newspaper El Periodico said in an editorial that the polls would “have a domino effect on Spanish politics” and put an end “to the endless game of chess that the major Spanish parties are playing”.
Spain has never had a coalition government, and many voters expressed frustration at politicians’ inability to reach a deal.
“We are making fools of ourselves,” said 61-year-old civil servant Mercedes Solana, as she cast her ballot in the fashionable Basque resort of San Sebastian. “No one reaches an agreement, everyone looks after themselves, they don’t talk.”
“They have to fix it and quit politicking,” added 32-year-old bank employee Mikel Garcia as he headed to the beach to read a book after casting his ballot for the PNV.
Polling stations opened at 9:00 am (0700 GMT) and were due to close at 8pm, with the first significant results due an hour later.