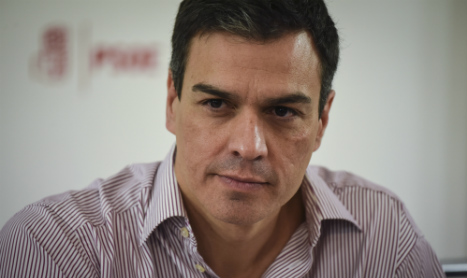 The country remains stuck in limbo, run by a government without full powers following two inconclusive elections which the conservative Popular Party (PP) won without an absolute majority, and which have seen parties unable to reach any coalition deal.

In this situation, many high-profile Socialists believe the party should let a right-wing coalition government led by acting Prime Minister Mariano Rajoy pass through parliament by abstaining in the necessary vote of confidence.

That would leave the Socialists in the opposition.

Sanchez, however, refuses to let Rajoy stay in power and is attempting to negotiate an alternative, left-wing government.

“We think that a coup d'etat is being prepared next week” to overthrow Sanchez, a source high up in the Socialist Party (PSOE), who refused to be named, told AFP.

Several regional presidents, known as the “barons” of the PSOE, have come out publicly against their leader.

They accuse him of stifling internal dissent and of being ready to reach a pact with far-left party Podemos, nationalist and separatist groupings in Catalonia and the Basque Country in order to form a government – despite being firmly against independence for any region.

“The PSOE cannot govern at any price nor give the impression that taking up residence in the Moncloa (prime minister's official residence) is our only objective,” Emiliano Garcia-Page, president of the Castilla-La Mancha region, said in an interview with The Huffington Post.

A source close to Sanchez, who refused to be named, confirmed talks were under way to explore a left-wing coalition composed of the PSOE and Podemos.

And the source added: “Pedro isn't willing to do just anything. He's never said he is looking for the support of separatists.”

But the Socialists and Podemos would only be able to get through a parliamentary vote of confidence if they enrolled the support of nationalist and separatist groupings.

'Going to kill us'

But making a deal with the separatists has many uneasy, as does pacting with arch-rival Podemos, blamed for gnawing away at the voter base of the PSOE which scored its worst ever result in January and again in repeat June polls.

“We are going from historic defeat to historic defeat, this guy is going to kill us,” said one of Sanchez's opponents in the PSOE, on condition of anonymity.

The Socialists have 85 lawmakers in parliament – a historical low – following the June elections, which like the previous December polls saw upstarts Podemos and centre-right Ciudadanos take votes away from the mainstream parties.

They are also expected to lose seats in the northern Basque Country and northwestern Galicia in regional elections on Sunday.

“If we don't have a good score, they will use that to try to overthrow Pedro Sanchez,” said the source close to the Socialist leader.

Opponents to Sanchez could try to force his resignation at a meeting of the party's leadership – where all the barons will be present – planned for October 1st.

But he in turn could anticipate this by convening an emergency assembly of PSOE members to ask for their support.

The barons would be unable to overthrow a leader approved by the party's rank and file.

In the meantime, though, Spain is facing the very real possibility of holding a third round of elections.