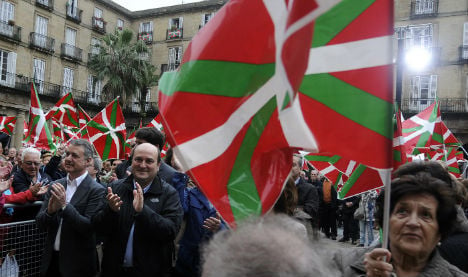 Opinion polls predict that the ruling moderate, nationalist PNV party will win in the northern region where memories of Eta attacks are slowly fading five years after the group quit violence, but where the desire for autonomy remains.

The ballot will also be watched closely further afield – as will regional polls westwards in Galicia – as the outcome may influence parties at a national level into helping unblock a nine-month deadlock and avoiding a third round of general elections.

On the ground in the lush, green region of 2.1 million inhabitants on the Atlantic coast, the focus is firmly on domestic matters, and on turning the page.

“Before we were scared all the time,” said Clara Gonzalo, 81, as she watched the sun set with her husband on the seafront promenade stretching around the bay of the Basque town of San Sebastian.

“A bomb exploded beside our house, all our windows shattered, our little girl cried. Now we live,” she added.

Eta is blamed for the deaths of 829 people in a four-decade campaign of bombings and shootings for an independent homeland in northern Spain and southwestern France.

There were also some 150 anti-Eta killings blamed on militias close to the police and police abuse, according to a study by the Basque regional government.

The group declared a permanent ceasefire in October 2011.

It has since sought to negotiate its dissolution with Spain and France in exchange for an amnesty or regroupment for the roughly 350 jailed Eta members in the two countries.

But Madrid and Paris refuse to negotiate with the group and argue it should disarm without any conditions attached.

As the campaign for regional elections focuses on the economy, some worry that memories of past violence are fading too fast.

“What surprises me most is the way that the issue of peace and the end of violence has grown old,” said Jonan Fernandez, the top official for the regional government's reconciliation initiatives.

“It is as if 25 years have already passed” since the attacks stopped, he added.

Socialist lawmaker Eduardo Madina, who was injured by an Eta car bomb when he was just 26, said the “Basque Country is in a fuzzy border between remembrance and oblivion.” While he welcomes the disappearance of graffiti praising Eta, Madina said he fears Basques are also becoming indifferent to the group's victims.

Across the region though, unemployment has become the top worry for voters, with 58 percent of those questioned by the MyWord polling firm saying it was a major concern.

Only one percent of those surveyed said they were worried about Eta.

The region is in better economic shape than much of Spain, with unemployment at just 12.5 percent compared with 20 percent nationwide, and its gross domestic product per capita is 30 percent above the national average.

The PNV is on track to win about a third of the 75 seats in the Basque regional chamber, followed by left-wing separatists EH Bildu and anti-austerity party Podemos, polls indicate.

The Socialists and conservative Popular Party are expected to come last.

Out of both these mainstream, traditional parties, though, the Socialists are expected to lose the most seats compared to previous elections – both in the Basque Country and in Galicia.

That, coupled with its dismal showing at national elections and rising internal strife, may pressure party chief Pedro Sanchez into allowing a right-wing coalition government through, rather than blocking it like the Socialists did in a parliamentary vote of confidence earlier this month.

Crucially for the central government, though, the re-election of the PNV is not expected to open a second separatist front in Spain.

Unlike leaders in the northeastern region of Catalonia who are pushing ahead with a plan to separate from Spain by 2017, PNV leader Inigo Urkullu argues independence “is a concept from the past.”

He wants to fight instead for “shared sovereignty” with Madrid over the Basque region, which already enjoys a great deal of autonomy, especially in fiscal issues.

By Daniel Bosque with Michaela Cancela-Kieffer in Madrid