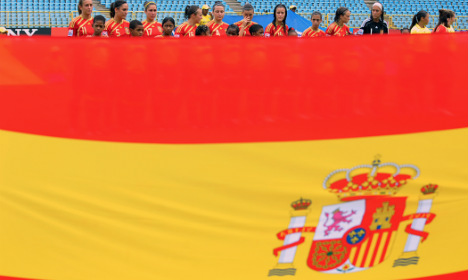 Spanish athletes have had to hum awkwardly for decades. Photo: AFP

One composer believes that with his verses focusing on freedom, peace and equality, he can finally get Spain to sing with one voice – without mentioning Spain at all.

Guillermo Delgado Ortega is the latest lyricist to attempt the challenge to put words to La Marcha Real, a wordless military march that has been used as Spain’s anthem since the 18th century.

During the dictatorship of General Francisco Franco the national anthem was given lyrics penned by fascist poet Jose Maria Peman, but those verses were dropped on the dictator’s death leaving Spaniards to hum awkwardly or ‘fa la la’ whenever it was played.

The new lyrics avoid any hint of nationalism and in fact don’t mention Spain or Spaniards at all instead focusing on vague geographical themes and universal liberty and equality.

“Water and earth border my frontiers, under a blue sky that I want to share,” he writes in his version called “Por tu Libertad”.

“Sun and moon, witnesses to the desire to live in peace without fear of failing.

“Hand in hand I want to respect your way of feeling, speaking and thinking.

“Dreams and goals I want to reach, fighting always for your freedom.”

He has produced two versions, a more solemn rendition to go with the traditional anthem and a flamenco-style version. The verses have been to the Spanish parliament’s petitions committee, which takes suggestions from citizens in the hope they will take up the issue.

Previous attempts to put words to the music have only inflamed those with regional sensibilities and divided opinion on the left and right and ultimately ome to nothing.

The lyrics chosen in a competition of 7,000 entries drew criticism with its opening line of “Viva España”, a phrase associated with the dictatorship of Franco.

Spain is one of only four nations in the world to have an anthem bereft of lyrics alongside Bosnia and Herzegovina, Kosovo and San Marino.

Last year, Madrid composer Victor Lago presented a petition with his lyrics that began with the words “Glory, homeland” but failed to win enough support to have them adopted.