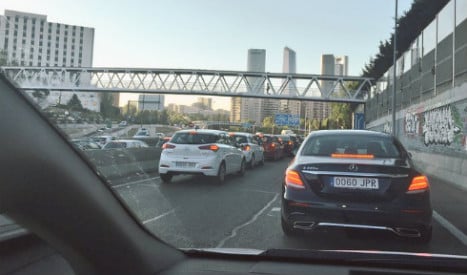 Cities across Spain marked World Car-Free Day on Thursday by closing busy streets to cars to encourage people to take public transport, use a bike or walk in response to rising air pollution.

But instead of freeing the clogged city streets of cars, many commuter spots were hit by lengthy traffic jams leaving frustrated drivers complaining about delays getting to work.

Barcelona authorities planned the closure of 58 streets within the city, including the busy thoroughfare of Via Laietana which runs the length of the Catalan capital from the northwest to the port and the Gran de Grácia.

Meanwhile in Madrid, traffic was cut on roads including Gran Via, Princesa and Paseo de Recoletos at different times during Thursday.

Car users and bus passengers posted photos of the traffic jams caused by the road blocks with many drivers complaining that they had only learnt of the restrictions when they were on the road.

By lunchtime in Barcelona, authorities reported that number of cars on the road had been reduced b 4.3 percent.

The intiative is being followed in cities in worldwide.

Here is the video promoting the idea: