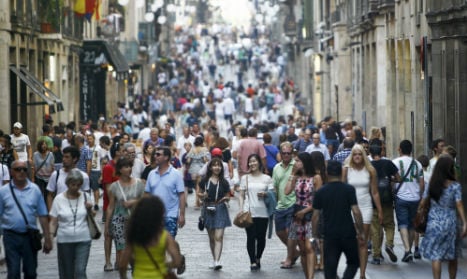 Stand out from the crowd? Chances are you fit into one of four personality types. Photo: AFP

A study of human behaviour led by a team at  the Universidad Carlos III de Madrid (UC3M) has established that 90 percent of people can be catagorized as: Optimistic, pessimistic, trusting or envious.

Most surprisingly perhaps is that 'envious' turns out to be the most common personality type.

Researchers studied 541 people as they participated in a series of hypothetical “social games” that worked out how they manage social interactions.

Each of their decisions then affects how the other individuals in the game respond.

The findings showed that 30 percent of people fell into the 'envious' bracket, while the three other types were only found to account for 20 percent of the participants each.

The classifications are as follows:

Those who don’t actually mind what they achieve, as long as they’re better than everyone else.

Those who believe that they and their partner will make the best choice for both of them.

Those who select the option which they see as the lesser of two evils.

Those who are born collaborators and who will always co-operate. They don’t really mind if they win or lose.

Anxo Sánchez, one of the study’s researchers, explains a typical example of one of the games:

“Two people can hunt deer together, but if they are alone, they can only hunt rabbits. The person belonging to the Envious group will choose to hunt rabbits because he or she will be at least equal to the other hunter, or maybe even better; the Optimist will choose to hunt deer because that is the best option for both hunters; the Pessimist will go for rabbits because that way he or she is sure to catch something; and the hunter who belongs to the Trusting group will cooperate and choose to hunt deer, without a second thought.”

A fifth undefined group exists representing the remaining 10 percent who researchers weren’t able to strictly classify because their responses did not appear to show any clear behaviour patterns.

The full study is published in Science Advances.