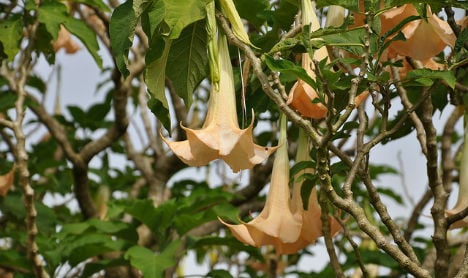 The drug is derived from a flowering tree commonly found in gardens. Photo: Shankar S / Flickr

A 36-year-old woman in Mallorca became the first person to test positive to burundanga, a popular name for the chemical scopolamine earlier this year, according to a report published in the specialist magazine Medicina Clínica.

The drug is derived from the seeds of the Brugmansia tree which blooms with deceptively beautiful trumpet shaped flowers.

It is mainly produced in Colombia via a chemical process that results in a white powder resembling cocaine where it is frequently used to drug victims to carry out sexual assaults and robberies.

It has been dubbed “devil’s breath” because of the widespread practice in Colombia of blowing it the face of victim instantly rendering them helpless.

But the drug can also be added undetected to food or beverages.

The Mallorca case was detected after the woman was brought into the emergency department of the hospital in Palma suffering “drowsiness, clouded vision with very dilated pupils and incoherent speech. She was confused and unsteady on her feet,” read the report. “She had no memory of what had happened.”

Police determined that she had been drugged by her ex-boyfriend who had purchased the powder over the internet.

The drug usually goes undetected because it leaves the blood stream within four to six hours, leaving little or no trace behind, and before the victim has had time to go to authorities.

But authorities in Spain believe sex the drug is increasingly being used in sexual assaults and robberies by criminals wanting to render their victims helpless.

Earlier this month Spanish security company Securitas Direct warned that the number of robberies being carried out using the drug was on the rise.

“They are targeting elderly people, turning up on their doorsteps to steal whatever they like,” reported Europa Press.

Hospitals have also warned that they suspect the number of people suffering the effects of the drugs are on the rise based on the clinical symptoms but have been unable to prove it.

The seeds from the plants, which are now commonly grown in gardens across Europe, can induce powerful hallucinations and were traditionally used during shaministic rituals in central and south America.

The Soviets and the CIA reportedly used  as a truth serum during the Cold War, while Joseph Mengeles, the Nazi physician dubbed the Angel of Death, had it imported from Colombia to use in interrogations.