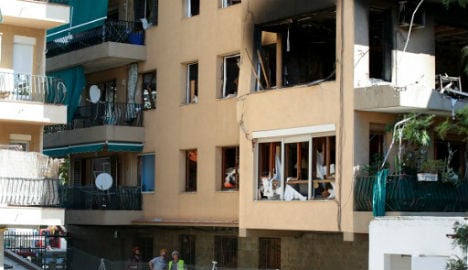 The blast blew out windows and cracked the wall of the building. Photo: Pau Barrena/ AFP
It was not immediately clear what caused the blast which took place in the residential building in Premia de Mar, a resort town some 25 kilometres (15 miles) north of Barcelona.
“The explosion happened at 8:25 am (0625 GMT) and affected 15 people, 14 of whom were injured and one who died,” a spokeswoman for Barcelona's emergency services told AFP.
Two of the injured were in serious condition, she said.
Local media reports showed images of a fire burning in a seven-storey building, saying the building had been evacuated while investigators tried to determine what caused the blast.