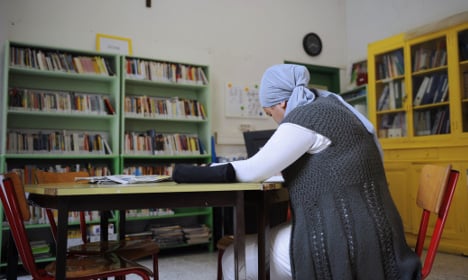 File photo of a woman wearing a hijab not related to the story. Photo: Anne-Christine Poujoulat/AFP

The 22-year-old, who is supposed to be studying a course in tourism at the Instituto Benlliure vocational school in Spain’s third city, was sent home on the first day of term because she refused to remove her headscarf.

The school has justified its decision by citing an internal rule which prohibits students from covering their heads while attending classes unless it is for hygiene reasons.

The woman argues however that the hijab is part of her religious identity, and has reported the incident to Spanish anti-racism organization SOS Racismo.

“This isn't a kid, it's a woman, of Spanish nationality, who has never had any problems in any school she has studied at before for wearing her headscarf,” SOS Racismo lawyer Francisco Solans told newspaper El Mundo.

The Valencian Community's ministry of education is now involved in the dispute, sending inspectors to the school in an attempt to mediate and suggesting that it either accepts the wearing of headscarves or that the student switches to another school which permits it.

Mònica Oltra, the Valencian Government’s minister for equality, has also had her say.

“We have to be very careful with religious freedom, cultural diversity, and the freedom of your own image,” she told El País.

The school's principle, Josep Cuenca, insisted to El País that the rule is not “discriminatory”, but rather “reasonable and well accepted” by students. By enrolling at the school, the girl agreed to comply to its internal rules, he claimed.

Cuenca also said that students have been denied access to the school for wearing a hijab on three previous occasions. In one instance a student was ultimately transferred from the school, in another, the student chose to stop wearing the hijab, while in the third case the person left the course.