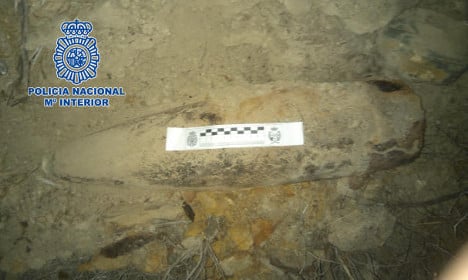 Part of the bomb dates back to 1917. Photo: Policía Nacional

The man was out digging with his daughter in a park in Molina de Segura, Murcia last Monday when they came across the large artillery shell. Over half a metre long and 155mm in diameter, the projectile was designed to house around 4.2 kilogrammes of TNT. Its fuse is almost 100 years old, manufactured in 1917.

Bomb technicians called to the scene noted a “high degree of external degradation” on the near century old explosive, and decided that because of its age and condition, moving it would be too much of a risk.

Specialists then detonated the antique bomb on the spot in a controlled manner.

Unexploded bombs from the Civil War are not an uncommon find in Spain. Earlier this week, police in Aragon detonated the largest wartime bomb found in the area for 20 years. Of Italian origin, it contained 25kg of explosives.

In 2014 an unexploded bomb was even discovered in the same region that had been hanging from a tree for 75 years.