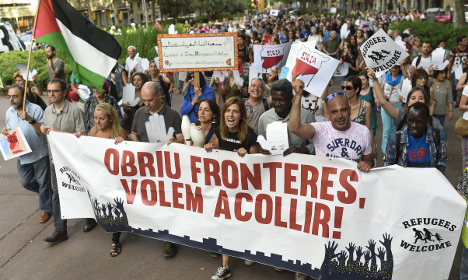 The paper from NGO Oxfam Intermón, entitled “Spain has failed in response to the global refugee crisis” has been released ahead of the first Leaders’ Summit on the Global Refugee Crisis in New York.

The report points out that Spain has so far taken in only one percent of the roughly 15,000 refugees it agreed to house in an EU redistribution plan which was designed to take some of the load away from overwhelmed Greece and Italy.

“Spain is very far away from fulfilling its promises,” the Oxfam Intermón paper states. “The Spanish Government has only followed through with one percent of the amount it committed to: 201 of the 15,888 people it promised to take have arrived.”

Oxfam Intermón highlights Spain’s position as one of the top 20 economies in the world, and claims that resources are not lacking, but rather the “political will” to respond to the refugee crisis.

As evidence, the NGO points out that according to government figures, Spain spends around €40 million annually in repairing and reinforcing border fences at North African territories Cueta and Melilla alone. In 2016 meanwhile the budget it allocated to the CETI refugee centres was less than half of that, €16.3 million.

The paper concludes that Spain should use the forthcoming Leaders’ Summit on the Global Refugee Crisis to “make a radical change to its migration policy and start down a new path on its displacement agenda where human rights prevail over any other politics,” instead of its present “more than dubious role as an example in the EU for being efficient at the infringement of human rights”.