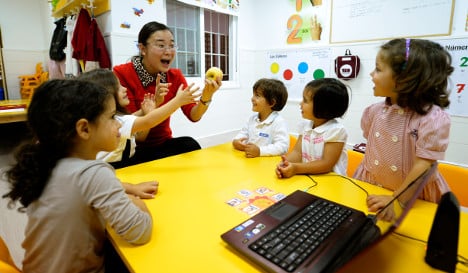 Spanish lower secondary (middle school) teachers are among the highest paid in out of the 36 countries analyzed in a new report by the Organisation for Economic Co-operation and Development (OECD) on Thursday.

But the report also noted that while teachers in Spain may start off with higher salaries than in other countries, they do not see as many pay increases as their careers progress.

After 15 years, a Spanish middle school teacher can expect a bump up to less than $47,000 a year and can expect a peak of on average $57,000 during their lifetime. In comparison, Austrian teachers start at much lower bases than Spanish ones at about $34,000 per year, but after 15 years have caught up to Spanish teachers at nearly $47,000, and could earn more than $66,500 at the height of their career.

When it comes to investment in education, the Spanish government spends less than the OECD average on each student, the report also observed.

The report pointed to the global financial crisis as the reason behind why Spain was spending less.

“Most countries were spending more per student in 2013 than they did at the start of the crisis in 2008, with the exception of European countries hit hard by the economic turmoil: Denmark, Estonia, Hungary, Iceland, Ireland, Italy, Slovenia and Spain.”