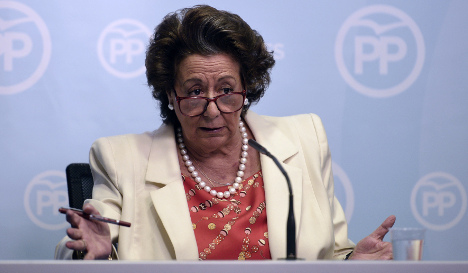 Rita Barberá released the announcement on Wednesday evening after the Supreme Court announced that it would investigate whether she played a role in Valencia corruption scandal.

Barberá, who served as Valencia’s mayor for more than two decades, earlier this year agreed to be questioned by a judge in the ongoing investigation into money-laundering by the PP.

“I have asked to leave the Popular Party because the Party asked me to, and thus also to show my commitment,” she wrote in the statement.

“The very painful decision, on the other hand, also allows me – with full freedom and without being subject to any discipline – to exercise my defense.”

Spanish media in March had published excerpts of a recording of a telephone conversation by her former advisor, Maria Jose Alcon, explaining how Alcon laundered €1,000 in party money.

“In this country the only thing that works is corruption,” Alcon can be heard telling her son in the police recording made a year ago which dominated headlines on Tuesday.

The recording was made as part of a probe into a suspected kickback scheme that operated in the eastern region of Valencia, a PP fiefdom until 2015 when voters turned to the left in regional elections.

The authorities are looking into allegations that companies, mostly from the building sector, paid commissions in exchange for public works contracts which helped finance the PP in the region.

In the recording Alcon tells her son the party was full of “black” money and suggests one of Barberá's secretaries requested the operation to launder it.

The former Valencia mayor has previously said that the allegations against her were “unfounded” and “completely false” and she had not committed any crime.

The scandal erupted in January, two weeks before the PP's headquarters in Madrid were searched as part of another corruption probe which tainted several people close to the head of the party in the region, Esperanza Aguirre, prompting her resignation.

Barberá was insistent in her announcement that she would continue to hold her seat, despite leaving the party with which she was elected.

“I express my intent NOT TO RESIGN FROM the Senate and to remain, as the law allows me to, because doing otherwise could be understood as an admission of guilt,” she wrote.

But since Barberá’s announcement, members of the PP have been discussing pushing her out of the seat.

El Pais reported that all parties in the Valencia parliament, including the PP, are going to vote on a proposal to urge Barberá to leave her Senate seat.

On social media, many have mocked the conservative politician’s insistence on keeping her seat despite opposition. The hashtag #RitaDinamitaM4 started trending in response.

One Twitter user wrote that she had “entrenched herself in the PP headquarters”, using a a picture of the politician posed as King Kong.

“Rita Barberá at this moment is becoming a new most wanted, everyone is trying to hunt her and she is on the run,” wrote another.