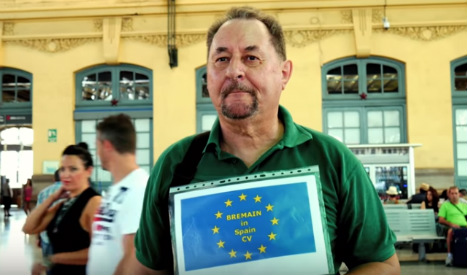 "We are just pawns in a big power game". Photo: Girl Friday Films

“When Brexit first happened, I think I was in total disbelief. Not only did the Brexit vote win but my entire family, my parents, aunts, cousins voted Leave,” explained Gemma Middleton, a 43 year-old filmmaker who moved to Spain seven years ago from Bristol.

“Yes, I took it personally,” she told the Local from her home in Cheste, a town some 30km from Valenica in eastern Spain.

“It made me realize that if my own family hadn’t thought twice about what it would mean for me then there was no chance that anyone else, especially the British government, would.”

Feeling powerless to do anything about it, she decided to collect the “forgotten voices of the British immigrant community in Spain”. “I don’t like the term expat,” insisted Middleton. “I think by calling ourselves expats it somehow marks us out as different to immigrants. But we are not different. We are no different from the three million immigrants from EU nations currently residing in the UK.”

Since the Brexit vote Middleton has been travelling around Spain with film director Samuel Sebastian gathering interviews with those who have strong views about Brexit.

“It’s been very interesting and even though Article 50 hasn’t been invoked yet, the effects are already huge. We’ve interviewed people who are moving back to the UK because the exchange rate post-Brexit means their pensions are no longer enough to live on.

“There is a director of a language academy who just won’t hire Brits if they have lived here for under five years in case they can’t get residency and have to move back,” she said.

A trailer for the documentary shows just how powerless some expats are feeling.

“Decisions are being taken that we have not been able to influence in any way,” said one man in the clip who complained he had no vote because he has lived outside the UK for more than 15 years. “We are just pawns in the big power game that has gone on.”

One woman raised the fears that many have over what rights British people will hae to free healthcare post-Brexit.

“At the moment we have European health card, we have Spanish health cards which means we are entitled to free health care across the European union. If we are no longer a member, that may not apply anymore,” she said adding that she had personally felt very upset about the result of the June 23 referendum.

“I went through all the various stages of grieving,” she said.

Another added a sentiment that will resonate with many of the estimated 800,000 British nationals living in Spain.

“I think everyone is in limbo at the moment”.