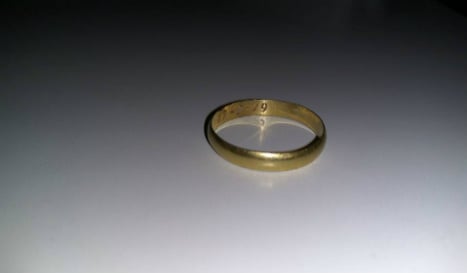 The ring was lost while swimming in the summer of 1979. Photo: Jessy Cuesta

When something glittered and caught her eye on the ocean floor at a depth of about seven meters she reached for it. And what she pulled out from the silt was a gold wedding ring, inscribed with the name Juani and the date, February 17th 1979.

“It just became very important to me to find the owner,” Cuesta told The Local over the telephone from the Nisos Dive Centre in Benidorm.”I knew it must have been important to someone and wanted to return it.”

She posted a photograph of the find on Facebook and asked her friends to share it in the hope of tracing the couple who married on that date and who had visited Benidorm but did not reveal the name inscribed, knowing that would only be known to the true owner.

“I found a wedding ring diving off the island of Benidorm. I wish I could give it back to the owner. It has been lost for a long, long time because it was covered in sediment,” she wrote.

The post was shared more than 78,000 times and had the desired effect. Jessy was contacted by more than 300 people but none of them matched the name that was inscribed in the ring.

Then she finally got the call she had been waiting for. From Juani herself.

“I hadn’t told anyone the name inscribed so when I was contacted by someone called Juani I gave a cry of joy!” explained Cuesta.

Juani explained that she believed it to be her husband Augustine’s wedding ring, a ring he lost five months into their marriage as they went swimming off Benidorm Island.

The couple who married in Benidorm but now live in Uteba, Zaragoza where they run a bar, are overjoyed at the discovery.

“It was a huge surprise that after 37 years someone found it and we heard about it” Augustine Aliaga, the owner of the missing ring told local newspaper Heraldo de Aragon, explaining that his wife’s family still live in Benidorm and that her niece had seen the post.

He clearly remembers the day he lost the ring in the summer of 1979.”My in-laws always used to travel across to the island for a day in July for lunch. I went swimming and then suddenly realized that I had lost the ring. I spent a long time search for the ring but to no avail,” he said.

“It’s a happy surprise, not because of the material value but the important symbolic and emotional value as it is the ring with which we were married in church.”

Cuesta will travel to Zaragoza next week to return the ring in person. “I could've just sent it in the post but then I thought how exciting it would be to see the moment they are reunited with something lost so long ago, the symbol of the love of a couple that are still happy together today,” she said.