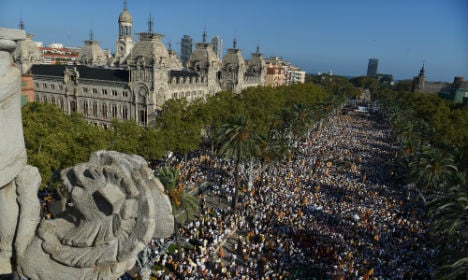 A pro-independence demonstration on September 11th in Barcelona during the National Day of Catalonia. Photo: AFP

Crowds waved red and yellow striped Catalan flags in Barcelona and four other cities under bright sunshine on the region's national day, the “Diada”, which marks the conquest of Barcelona by Spain's King Philip V in 1714.

Many wore white T-shirts with the slogan “Ready” in Catalan, highlighting their belief that the northwestern region of 7.5 million people was already prepared to be its own country.

“This is the moment to stand united for the 'yes' to the Catalan Republic,” Jordi Sanchez, the head of the Catalan National Assembly, a pro-independence organisation which co-organised the protest, told the rally near the regional parliament.

“We are impatient,” he added.

The run-up to the protest has coincided with a rift between separatist parties just as they target independence for the region in mid-2017.

In the coming months “critical decisions” regarding Catalonia's future will have to be taken, the head of the regional government of Catalonia, Carles Puigdemont, told a meeting with foreign journalists before the rallies.

Catalan separatists have tried in vain for years to win approval from Spain's central government to hold an independence referendum like the one held in 2014 in Scotland in Britain which resulted in a “no” vote.

After winning a clear majority in Catalonia's regional parliament for the first time ever last year, secessionist parties approved a plan to achieve independence in mid-2017.

But the plan ran into trouble in June when Puigdemont's coalition government lost the support of the tiny anti-capitalist party CUP which has the hardest line on independence. As a result it lost its clear majority in
the assembly.

The pro-independence camp hopes Sunday's mass protest will reunite and breathe new life into their campaign, which is moving along more slowly than many of its supporters would like.

“Politicians say we are close but we want to see it happen now,” said 60-year-old researcher Xavier Vallve at the rally in Barcelona.

Carmen Santos, a 58-year-old civil servant, said she hoped this “Diada would be the last before independence.”

Rallies were also held in the southern city of Tarragona, Berga in the centre, Salt in the north and Lleida in the east.

Catalans have nurtured a separate identity for centuries, but an independence movement surged recently as many became disillusioned with limitations on the autonomy they gained in the late 1970s after the Francisco Franco dictatorship, which had suppressed Catalan nationalism.

Since 2012, major demonstrations in favour of independence have been held in Catalonia every year on its national day on September 11th.

In 2013, hundreds of thousands of Catalans draped in blue, red and yellow separatist banners held hands in a 400-kilometre (250-mile) human chain across the region while in 2014 and 2015 demonstrators held massive rallies in Barcelona.

Among the political leaders who took part were Puigdemont, his vice president, Oriol Junqueras, and also Barcelona's popular mayor, Ada Colau, who is ambiguous about independence.

Her far-left allies, Podemos, are the only large national party backing a referendum while campaigning against independence.

“Catalonia is the main political challenge that Spain faces,” he said.

A recent survey showed that, for the first time, the number of those who would vote for independence has surpassed the anti-independence vote.

The percentage on Catalans who want the region to break away from Spain is now 47.7 percent, compared to 42.4 percent of people who want to remain part of Spain, according to the survey published in July.