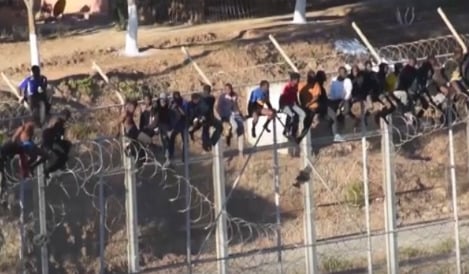 Dozens of migrants waiting for hours atop the fence in Ceuta. Screengrab: Ceutaactualidad / YouTube

The United Nations agency for refugees has called on the acting government in Spain to observe human rights after around 150 migrants were stranded for hours atop six-metre-high fences at Ceuta’s border with Morocco.

The UNHCR called for an end to the automatic return of migrants to Moroccan authorities at the frontiers of Ceuta and Melilla.

Video footage shows dozens of people sitting atop of the high fences, some caught up in razor wire,  as they attempt to reach Europe.

Border police used cranes to reach the men and pull them of the fence. Five men were taken to hospital in Ceuta to be treated for injuries while the remaining migrants were handed over to Moroccan authorities.

“They would have used violent methods against people of sub-Saharan origin who were returned to Morocco after spending several hours perched on the fence,” said the  UNHCR in an appeal to Spain’s interim government.

“Refugees must be treated in an atmosphere free of violence and with full respect for their human rights,” the organization said in a statement on Monday.

Ceuta, along with Melilla to the east, are Spanish territories on the northern coast of Morocco that together form the European Union’s only land borders with Africa.

Spain fortified fences in the two territories last year in response to a rise in the number of migrants trying to jump over the barriers from Morocco.