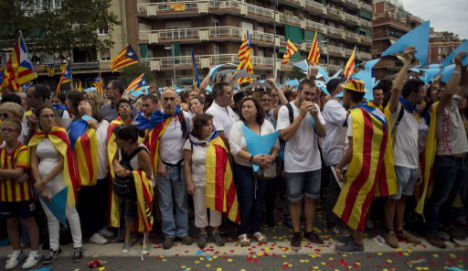 485,000 people registered to join the Diada marches last year. Photo: Jorge Guerrero / AFP
After winning a clear majority in Catalonia's regional parliament last year, secessionist parties approved a plan to achieve independence in mid-2017 but have since become divided by ideological differences and little progress has been made.
Separatists hope that people will come out en masse in various towns and cities of the wealthy, northeastern region on September 11 when it marks its national day.
“I encourage you to fill the streets,” regional president Carles Puigdemont said in a video released ahead of the demonstration. “We have to show that we are ready to finish this process that will convert Catalonia into an independent state,” he added.
His government is walking a tightrope after the pro-independence coalition ruling Catalonia broke down in June as its most radical component — the tiny, anti-capitalist CUP party — refused to back the proposed budget for 2016.
Without the CUP and its 10 parliamentary seats, Puigdemont has been reduced to running a minority government with just 62 seats in the 135-seat Catalan regional assembly.
As a result, he faces a confidence vote in the parliament on September 28, just weeks after the planned demonstrations across the region.
While the CUP has said it will once again support him, there are still deep divisions over how to put in place an independence plan that acting Prime Minister Mariano Rajoy has warned is a “hugely serious threat” to Spain.
Since 2012, major demonstrations in favour of independence have been held in Catalonia every year on its national day, or Diada, on September 11.
In 2013, hundreds of thousands of Catalans held hands in a 400-kilometre (250-mile) human chain across the region while in 2014 demonstrators formed a giant “V” for “victory” in Barcelona, the capital of Catalonia.
This year demonstrators will be dispersed in five different towns and cities to march under the slogan: “Ready. Onwards Catalan Republic.”
Organisers say the goal is to show the independence movement is spread out across Catalonia, a region of some 7.5 million people that boasts its own language and customs.
But opponents of independence argue that organisers are dispersing the annual protest this year to try to mask the fact that turnout will be lower than before.
“This protest will serve to show that independence has less support,” said Ines Arrimadas, the leader of the main opposition party in Catalonia, the centrist and anti-independence Ciudadanos.
Jordi Cuixart, the president of Omnium Cultural, which promotes Catalan culture and is one of the organisers of the protests, told AFP the pro-independence movement had mobilised hundreds of thousands of people over the past five years. It's very solid,” he said.
So far more than 300,000 people have signed up to take part in the event, compared to the 485,000 who registered last year. The protest in 2015 was held just before a regional election on September
27 which was billed by the then head of the Catalan government, Artur Mas, as a proxy referendum on independence.
His “Together for Yes” coalition won 62 seats which when combined with the CUP's 10 seats gave pro-independence parties an absolute majority in the assembly to press ahead with their secessionist plans.
But in January, Mas had to cede his place to satisfy the CUP, which takes a more hardline approach to independence. It for instance wants to press ahead with an independence referendum even
if it is banned by the central government.
“These disagreements have generated moments of anguish and anger,” said Jordi Sanchez, the president of the Catalan National Assembly, a pro-independence organisation which is co-organising the protest. “But at the moment of truth people will not disappoint.”
Catalonia, which accounts for nearly a fifth of Spain's economic output, has long sought more autonomy from Madrid.
Spain's recent economic downturn exacerbated the situation, leaving many resenting the amount of taxes they pay to the central government in Madrid to subsidise poorer regions.