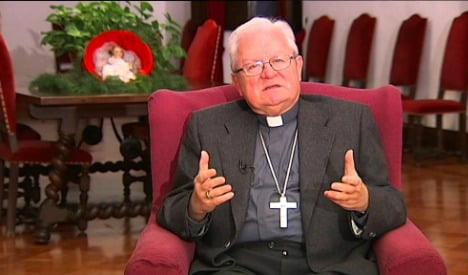 Javier Salinas Viñals was accused of having an affair with his secretary. Photo: Bishopric of Mallorca

Javier Salinas Viñals, 68. who was appointed as bishop to the Balearic islands in 2013, was reported to the Vatican by the ex-husband of his former secretary who claimed the prelate had been having a long-standing affair with his wife.

The scandal erupted last December when a dossier was presented to Vatican authorities containing a alleged evidence collected by a private detective.

The complaint alleged that the bishop had been conducting an affair with his secretary that had led to the break-up of her marriage.

It included photographs of the pair together as well as testimony from witnesses and phone bills that purported to show the Bishop had made lengthly late night calls to “his mistress”.

It also claimed that the pair had exchanged rings.

The Bishop admitted that he had a close friendship with the woman in question but insisted there was “no loving relationship” and said the rings had been exchanged as a gesture within a prayer group.

He had appealed to the Vatican to stay in his post as bishop but this week was removed from the role and will instead be transferred to the archdiocese of Valencia as an “apostolic administrator”.

The Vatican confirmed only that Salinas would be taking up the new role in Valencia in its bulletin published on Thursday without citing reasons and said that Sebastià Taltavull Anglada, currently auxillary bishop in Barcelona would become the new bishop of Mallorca.