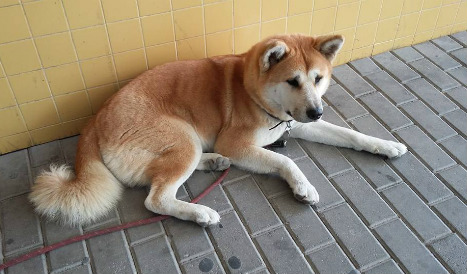 Sandra Iniesta, 22, was discharged from Elda hospital near Alicante on Saturday where she rushed a week earlier after suffering a ruptured appendix.

Waiting loyally for her at the door of the hospital was Maya, a two-year-old Akita Inu, who had steadfastedly refused to leave her vigil while her owner was recovering.

Even when her owner’s father attempted to pull her away tempting her into the car with offers of treats, the dog refused to budge.

“She knows what is happening and she is showing that she can be patient,” he explained to local Alicante newspaper Información of Maya, whose Japanese breed is famous for its loyalty.

She quickly became a favourite with hospital staff who posted a photograph of Maya on their facebook page and the story soon went viral on social media.

Iniesta emerged from the hospital on Saturday to discover her beloved dog had become a celebrity.

“She just did what she does at home in Barcelona which is wait at the door of a place until I return,” explained Iniesta.

“After days of not seeing my girl Maya, the kiss and happiness at seeing me and me her is priceless,” she wrote on Twitter

This story has a happier ending of that of a dog who earlier this year spent two months waiting outside a hospital in southern Spain for its beloved master to return.

For two months the mongrel survived on scraps until it was finally found a foster home when hospital staff worked out that the dog was waiting for an owner who would never return as he had died in hospital two months previously.