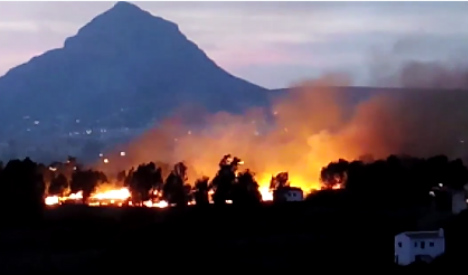 Three separate fires appeared to have been started deliberately on Sunday afternoon between Jávea and Benitatxell and spread quickly as the flames were fanned by strong winds.

At least two dozens homes were damaged while residents in hundreds more were told to leave their  and campsites and seek refuge in schools and sports centres as well as local hotels and restaurants outside the danger zone.

Officials evacuated over 1,000 people late on Sunday and one man was arrested for refusing to leave his home.

This is crazy. I think my car and maybe my apartment is on fire. I hope everyone in Javea is ok pic.twitter.com/gbYjTEZuj0

Firefighers battled throughout the evening and overnight to control the wildfires which spread out to form a 7km front.

Firefighters resumed the deployment of 14 water carrying aircraft and helicopters early Monday morning to bring the flames under control.