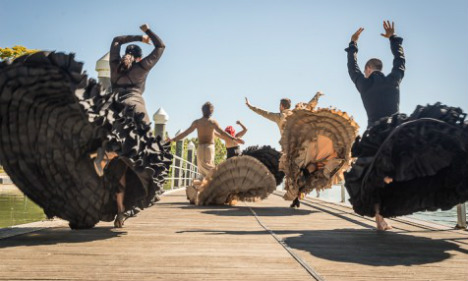 The Prado is commemorating the 500th anniversary of the death of Dutch artist Hieronymus Bosch with a comprehensive exhibition that has been so popular it has been extended until Sept 25th. It features some of his most exceptional paintings – including The Triptych of the Temptations of Saint Anthony – and others on loan from leading museums such as the Louvre In late September San Sebastian proudly host their world famous film festival.  It will be opening with 150 Milligrams, directed by Emmanuelle Bercot, and closes with another French production, the world premiere of The Odyssey, writer-director Jérome Salle’s biopic of oceanographer Jacques Cousteau. Both Sigourney Weaver and Ethan Hawkes are to be honoured with the Donostia award for lifetime achievement.
La Bienal Flamenco festival, Seville (September 8th to October 2nd) 'Flamenco will be everywhere' Photo: Labienal.com
Flamenco will take over the streets, plazas and dark corners of Seville throughout September as the Andalusian capital stages La Bienal, a month long celebration of the traditional dance and music.
Expect open air flash mobs in market places as well as well-known performers in venues across the city.
Wine
Rioja and the five senses festival, Logroño (September 3rd -16th) Events are held in vinyards across La Rioja. Photo: AFP

We all know and love the wine from Spain's most famous grape-growing region but now is the chance to appreciate it using all your senses.

For a fortnight, wineries across La Rioja throw open their doors to a series of concerts, tasting events, talks and tours all designed to add to the enjoyment of a glass of wine.