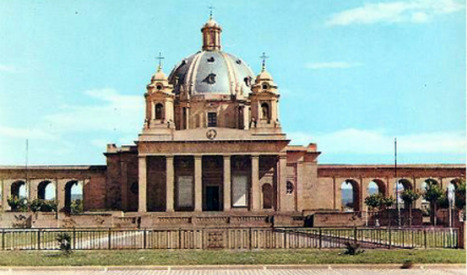 The bodies will be exhumed from Pamplona's Monumento a los Caidos. Archive photo

The council in the Navarran capital have decided to exhume Emilio Mola Vidal and José Sanrujp Sacanell and return the corpses to their families for private burial after interpreting the Historical Memory Law that calls for the removal of Franco regime symbols from public places.

The law was passed under the Socialist government of Jose Luis Rodrigues Zapatero in 2007 in an attempt to heal the wounds of the 1936-39 Civil War and ensuing dictatorship. The law requires the removal fascist symbols from public view and the renaming of streets and plazas honouring Franco and his henchmen.

Pamplona’s council, run by a coalition of the populist left Podemos and EH Bildu (Basque Independents), have interpreted the law to extend it to the Monumento a los Caidos, (Monument to the Fallen) a domed mausoleum which holds the remains of the two Francoist generals alongside another six Francoists killed in Pamplona during the conflict.

The square where the domed mausoleum is located has already been renamed Plaza de la Libertad (Freedom Square) removing the name of Conde de Rodezno, a justice minister during the Franco regime for whom the square was named before.

The exhumation will take place in November overseen by Francisco Etxeberria, a forensic archaeologist who has led over 400 exhumations of unmarked mass graves dating from the Civil War.

The basilica, which was constructed in 1942 to honour the 4,500 men from the region of Navarra who died fighting for Franco’s Nationalist forces, will then be turned converted into an ‘Historical Memory Centre”.

“We can’t understand why this hasn’t been done before,” said Joseba Asirón, the mayor of Pamplona (from the EH Bildu party). “It will be carried out with the utmost discretion and respect” for the families of those interred within, he said.

“This isn’t for the sake of revenge, but only to comply with the law and do justice to our history,” he explained.

But the decision to exhume the two generals, who both died in air crashes during the Civil War, has caused controversy.

Relatives of General Sanjurjo argue that the law in no way allows the “brutal exhumation” from a consecrated site and said that they “had not been consulted and in no way condoned the exhumation. This first exhumation of Francoist generals could have consequences for the fate of El Caudillo himself.

General Franco is currently entombed in The Valley of the Fallen, a vast basilica carved out of the living rock in the hills 50kms west of Madrid that was built by political prisoners during the Franco era as a memorial to those who died fighting for the dictator's cause during the Civil War.

Campaigners have long called for the remains of Franco and Jose Antonio Prima de Rivera, the founder of Spain’s fascist Falange party to be removed and the site turned into a centre for historical memory.

An estimated 50,000 bodies of Nationalists soldiers lie alongside those of Republican supporters whose corpses where added in order to fill the huge crypt.