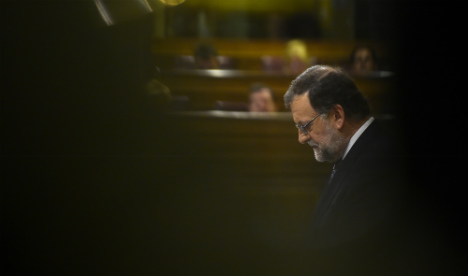 Rajoy is lacking the support to form a government. Photo: Pierre-Philippe Marcou

Mariano Rajoy is six votes short of securing a vote of confidence for his government in the 350-seat chamber after two elections that his conservative Popular Party (PP) won but fell short of a majority.

The opposition Socialists have steadfastly refused to back Rajoy, whom they blame for corruption scandals and steep public spending cuts.

Socialist leader Pedro Sanchez repeated his intention to vote against Rajoy, insisting the PP leader “has no credibility”.

For his part, Rajoy has warned that the deadlock risks jeopardising Spain's economy and even raises questions about democracy.

“It is hard to think of anything that could cause more damage to Spanish democracy than telling citizens that their vote has been useless on two occasions and that a general election needs to be held for a third time,” he said.

And weary voters are growing increasingly frustrated with politicians and their inability to forge a compromise to form a government.

Alicia Gomez, a clerk at a perfume shop near Madrid's central Plaza Mayor square, said politicians were all “playing for time” and she no longer trusted any of them.

“It's a joke, theatre. Politicians should stop right now and reach an agreement whether they like it our not,” fumed the 36-year-old.

After the likely failure of Rajoy's bid on Wednesday, the next step in the political drama comes two days later with a second parliamentary vote.

For the second vote, the acting prime minister — who has secured the backing of market-friendly upstart Ciudadanos and the vote of a lone nationalist lawmaker from the Canary Islands – needs only for the Socialists to abstain.

If there is no breakthrough two months after Wednesday's parliamentary ballot, vote-weary Spaniards will be asked to return to the polls on December 25th due to the timings set out in Spanish election law.

But the Socialists and other parties have already proposed shortening the campaign so a repeat election could be held on December 18, a sign that fresh polls are looming.

Spain suffered a painful economic slump when a housing bubble burst in 2008 but has bounced back to become of the eurozone's most dynamic economies, growing for 12 straight quarters.

But the political stalemate has begun to show signs of taking its toll on the economy.

Rajoy remains in office as acting prime minister but with no power to propose legislation or spend on new infrastructure projects such as roads and railways.

The lack of a fully functioning government also delays drawing up a national budget for 2017, which needs to be approved by mid-October to comply with European Union rules.

But Rajoy angered the PNV during the debate in parliament by focusing on the defence of Spanish unity.