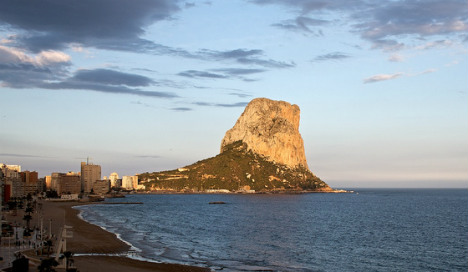 The discoveries have been made off Calpe. Photo: Víctor Gutiérrez Navarro / Flickr

Scuba divers from a local dive centre made the first discovery on Saturday when they came across what appeared to be a human skeleton wrapped in a sheet with items used in Santeria – a religion related to voodoo popular in Cuba that fuses Christianity with West African cult practices.

A specialist diving team from the Guardia Civil explored the area and then discovered a second package, also containing what appeared to be human bones and the same sort of items used in the rituals, which often centre on animal sacrifice.

Among the items police have identified is a bowl, feathers, leaves and twigs with names scratched onto them as well as dolls.

A third package was then spotted by scuba divers in the same area on Monday but has yet to be retrieved from the seabed.

Forensic examination of the bones in the first package – a skeleton and items tied up in a sheet,  suggests that the bones had been buried in earth for between 30 to 40 years before being dug up and thrown into the sea only recently.

The Guardia Civil  are exploring whether the skeleton may have been recently removed from a cemetery and used in a Santeria ritual before being cast into the sea.

They have called in an expert in the religion to help in the investigation, according to local paper Diario Informacion.

The ‘packages’ were found near the Peñon de Ifach, a huge hulk of rock that stands at the end of Calpe and is visible across the Costa Blanca. The rock is a popular site from which people spread the ashes of their loved-ones into the Mediterranean following cremation.