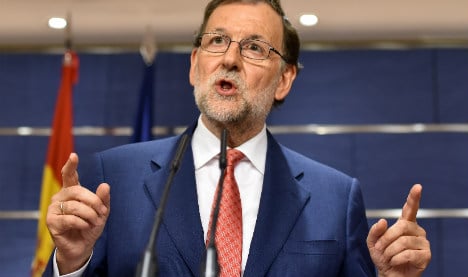 Rajoy is struggling to form a government. Photo: AFP

The country has been without a fully-functioning government for eight months with squabbling political parties unable to reach any kind of pact following inconclusive polls in December, and again in June.

Acting Prime Minister Mariano Rajoy, whose conservative Popular Party came first in both polls though without an absolute majority, is negotiating to try to form a minority or coalition government.

But he faces huge resistance and the prospect of yet more elections is looming large.

On the economic front, however, “there is little evidence that this is having a significant impact”, says Miguel Cardoso, chief economist for Spain at BBVA Research, pointing to the strength of most indicators.

Last year, the economy was one of the eurozone's most dynamic, growing 3.2 percent, and GDP has risen for 12 straight quarters since Spain emerged from a severe crisis that erupted in 2008 when the property bubble burst.

This trend is being spurred by household spending, which will grow about three percent on-year in the second half of 2016, predicts Cardoso.

This spending is being boosted by people who kept their jobs during the crisis and have taken advantage of better times to buy items such as cars, a temporary phenomenon that “has a limit”, he warns.

Unemployment has fallen, although at 20 percent it still remains the second highest rate in the eurozone after Greece.

Rajoy's caretaker government predicts it will fall even further in 2017 to 16.6 percent.

Spain's economy — the fourth largest in the eurozone — has benefited from the policies of the European Central Bank (ECB), like many others.

The bank's monthly purchase of public and private debt under a stimulus programme is fostering a climate of low interest rates for companies and the Spanish state, which is therefore keeping borrowing at historic lows.

“Rajoy is appropriating this politically, but this isn't happening only in Spain,” says Jose Carlos Diez, economics professor at the Alcala University and a specialist in monetary policy.

“In Spain, the effect of the ECB's intervention has been doubly more intense than in other countries,” he adds, given that the country is only just emerging from the dire straits of the crisis.

Carolina Morcos, an analyst at brokers Renta 4, cautions that “the most regulated sectors are the most affected” by political uncertainty, pointing to energy and construction companies.

A spokesman for a Spanish energy company, who wishes to remain anonymous, acknowledges there are many issues left outstanding, such as the policy towards renewables.

The sector used to benefit from considerable state subsidies but these have dwindled with the crisis, and the current political deadlock means nothing is being done “good or bad”, says the source.

Despite this, he says, the fact that companies in the renewables sector such as Iberdrola, Endesa or Gas Natural Fenosa have expanded beyond Spanish borders “has allowed us to overcome the ups and downs of the domestic market in Spain over the past years”.

As for construction, the government has cut investment in public works in the past few months as part of efforts to reduce its deficit below the three percent bar set by the European Union.

But in this case too, companies such as ACS, Acciona, Ferrovial or OHL have avoided the problem as they also expanded abroad after the property bubble burst.

Still, there are worrying signs in the Spanish economy, says Victoria Torre, an analyst at Self Bank.

She says “trading volumes are very low” in the Madrid stock market despite the fact that Spain's economic growth is higher than the eurozone average.

Citing BBVA estimates for 2016, Cardoso says that growth – which the government expects will come in at 2.9 percent – could have been higher without political uncertainty.

And time is of the essence, he warns, as Spain is vulnerable to any kind of external shock.

“For this we need a government that takes measures,” he says.