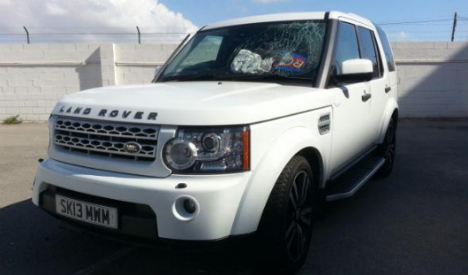 Robert Sneddon, 61, was struck by a white Land Rover Discovery on the N-332 at Guardamar del Segura on the Costa Blanca as he walked home on Sunday night.

The driver fled the scene and is being hunted by police.

Police have now released pictures of the car, which show it was registered in Edinburgh in 2013.

“Sooner rather than later we will catch you. If you present yourself voluntarily, things will be better for you.”

The car was registered to a British company, according to Juan Carlos Moragues, a government delegate. “We are collaborating with the British authorities to see who the driver was and how they relate to the company,” he said in a statement on Tuesday.

“If they were accompanied or not and if the incident was a result of rage, negligence or another cause.”

Mr Sneddon is understood to have lived in Spain for 15 years and has four children and four grandchildren.

The victim's daughter Mandy was visiting at the time and has made a public appeal.

“I am the daughter of the man left dead on the N332 like an animal,” she wrote on Facebook.

“I came on holiday for the summer so my little girl could spend time with her granddad.

“It was the worst news I have ever had to break or hear.

“If anyone knows anything or can think of anything relevant please tell the police. The smallest detail may help.

“And to the person or people responsible. If you reading this, please come forward.

“You’ll have this on your conscience for the rest of your life. My family wants closure. Please. RIP dad.”

Anyone with any information should call the Torrevieja Traffic Department on 966 707 301 or report to their local police station.