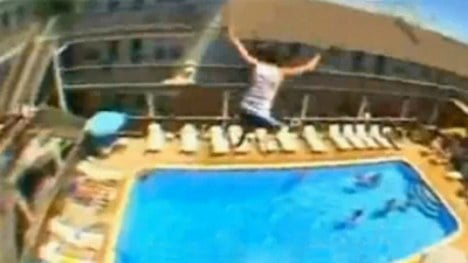 The so-called “balconing” craze has taken off to such an extent in Spain's Balearic Islands that doctors at the Son Espases hospital in Palma de Majorca – a major trauma centre – decided to study the phenomenon.

“It's endemic,” says Xavier Gonzalez, head of surgery at the hospital who participated in the study.

“It seems that… it's like an initiation rite for some tourists, whose parents already came here when they were young.”

The 2010-2015 study only covers patients who were treated in hospital and not those who died while “balconing” – a term that refers to people who throw themselves into pools or fall while trying to get to another balcony or simply leaning over.


A British tourist 'balconing' in Spain.

Altogether, the hospital treated 46 patients during that time, more than 60 percent of whom were British, followed by Germans and then Spaniards, the study found.

Only one woman was involved, all the others were men, aged 24 on average.

The fall itself was from an average height of eight metres (26 feet).

Alcohol was involved almost every time, and in close to 40 percent of the cases, drugs also played a role.

Altogether, the craze has cost €1.5 million  ($1.7 million) in hospital fees, Gonzalez says, as patients can remain in intensive care for a long time, some ending up paraplegic.

It is unclear exactly how many people have died from “balconing”, but Spanish media have reported more than a dozen deaths over the past five years.

'Hit every balcony on way down'

The craze also happens on Spain's northeastern Costa Brava, but it is most prevalent in the Balearic archipelago, which includes Magaluf and Ibiza among its famous resorts, Gonzalez says.

Further afield, Bulgaria has also been hit by “balconing.”

In a bid to curb the trend, authorities in the Balearic Islands have implemented measures – printing preventative leaflets and handing out fines to people caught trying to jump from balconies.

“As a precaution, when they see a group of young people arrive, hoteliers no longer put them on top floors but on the ground floor,” adds Gonzalez.

Britain has also tried to warn its nationals of the dangers of throwing themselves off balconies.

Drunk, he fell from the seventh floor of his flat in Magaluf in 2011.

“I hit every balcony on the way down, as they jutted out like steps,” he was quoted as saying.

“I landed on a sun lounger which broke my fall and probably saved my life.

“I fractured my skull, broke front teeth which pierced through my upper lip, snapped my right wrist and broke all the fingers on my right hand,” he said.

“The accident has changed my life… I have recurring problems with my back and right wrist and doctors have told me I probably always will.”

Footage of rowdy British and German tourists at the weekend went viral on social media, sparking anger from Spaniards who feared the holidaymakers may spread coronavirus.

Lawyers for the Balearic Islands government, which governs Mallorca where Magaluf is located, are studying ways to close down the street and bars around Punta Ballena in Platja de Palma.

The measure would reassure countries like Britain and Germany, whose tourists form the largest groups by nationality to come to the resort, that Magaluf is a safe destination, reported Diario de Mallorca newspaper.

It will form a package of tougher measures, which are due to be unveiled on Tuesday by the regional government, to stamp out loutish behaviour.

“Of course we want tourists to come, but not carry out these excesses,” said Nati Francés, the deputy mayor of Calvià, which includes Magaluf.

“We want tourists who enjoy nightlife, yes, but we do not want an alcohol theme park.”

The measures may also apply to Sant Antoni de Portmany in Ibiza.

Face masks are compulsory in the Balearic Islands in all public or private places, including bars and restaurants and can only be removed whilst eating and drinking. Anyone flouting the law faces a fine of €100.

Wearing a mask will not be necessary at the beach, at swimming pools, when playing sports or playing a wind instrument. 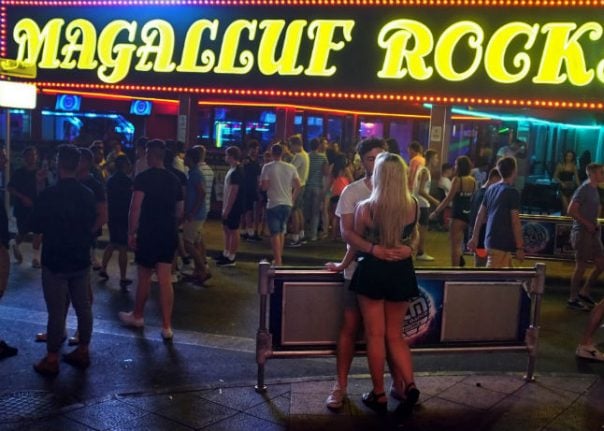